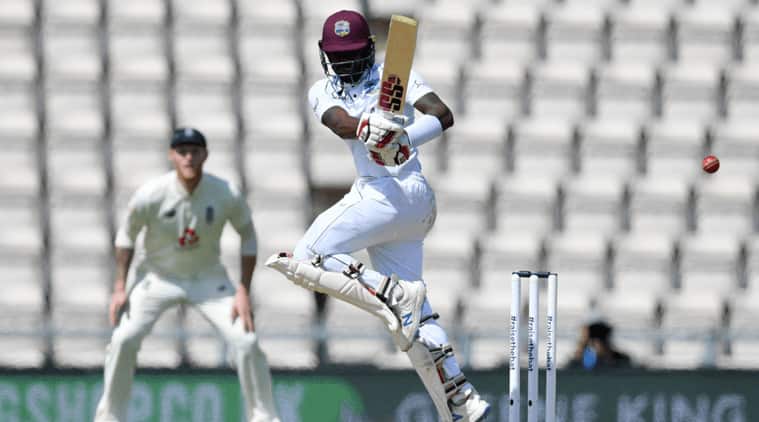 West Indies pulled off a chase of 200 in the fourth innings in the final hour on Day 5 to beat England by 4 wickets in the 1st Test of the series and take a 1-0 lead in the three-match series.

The chase had its tense moments, with retired hurt opener John Campbell required to come back out in the final few minutes to accompany skipper Jason Holder as they guided the team to a close win. The star of the day with the bat was Jermaine Blackwood, whose brave 95 under pressure is his highest score since 2016, and his second highest score overall.

Jofra Archer looked to have set the tone for the day when he forced Campbell to retire hurt as Windies began their chase, then bowled Kraigg Brathwaite and Shamarh Brooks. West Indies went into the Lunch break at 35/3, looking into the barrell.

The Lunch break brought about a change in momentum, as Roston Chase (37) and Jermaine Blackwood found some tempo as the ball began getting older. England bowlers apart from Archer failed to threaten much.

Ben Stokes made some inroads late in the innings – picking up the wicket of Blackwood with 11 more to win, thus giving England a sliver of hope in the final few minutes.

Not the result we wanted, but it’s great to be back 🏏
Well played @windiescricket 👏

Campbell came out hobbling with an injured toe after this, shielding the West Indies bowlers. The visitors sneaked to victory with 4 wickets left.

The Man of the Match award was given to Shannon Gabriel, who picked up 9 wickets in the match and a fifer in the second innings. This was Gabriel’s best performance away from home.

This is only the second time since 2000 that West Indies have won a Test on English soil.

David Warner tags himself ‘Male Tiktoker of the decade’