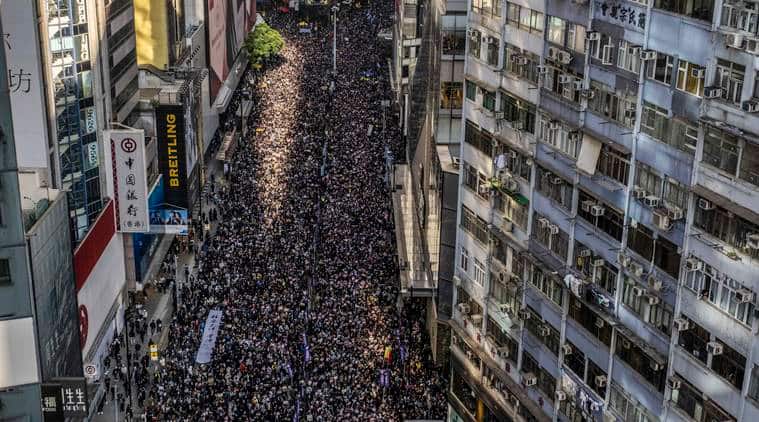 One year ago, a sea of humanity “a million people by some estimates” streamed through central Hong Kong on a steamy afternoon.

It was the start of what would grow into the longest-lasting and most violent anti-government movement the city has seen since its return to China in 1997.

A year later, as new protests simmer, China is poised to enact a national security law to crack down on further disturbance. After 12 months of exhilaration for some, exasperation for others and exhaustion for all, Hong Kong’s future still hangs in the balance.

JUNE 9, 2019: Hundreds of thousands of people demonstrate against proposed amendments to Hong Kong laws that would allow suspects to be extradited to China to face trial. Many feel the legislation would undermine the ?one country, two systems? principle under which Hong Kong was returned to China by exposing residents to a murky legal system with fewer protections. An even larger march against the proposal took place the following week.

JUNE 12: Protesters take over the streets around Hong Kong’s legislature, known as Legco, and prevent lawmakers from entering to debate the extradition bill. Some throw rocks and metal barricades at police. Officers use tear gas to disperse the crowds in what will become a common practice in the months ahead.

JULY 1: Protesters smash their way into the legislature building on a public holiday, spray-paint slogans on the walls, tear down the portraits of legislative leaders and deface the Hong Kong city emblem in the main chamber. The legislature remains closed for repairs for a few months.

AUGUST 17: A large contingent of Chinese militarized police with armored vehicles mass to hold drills in Shenzhen, the mainland city bordering Hong Kong. The presence of the People’s Armed Police, whose functions include crowd and riot control, sparks speculation that they would intervene in Hong Kong’s protests.

AUGUST 25: Hong Kong police deploy a water cannon for the first time as clashes with protesters escalate. The water is often laced with pepper spray to cause a stinging sensation and dyed with coloring to mark the clothing of those who join protests.

SEPTEMBER 4: With no end in sight for the protests, Hong Kong leader Carrie Lam says the government will formally withdraw the extradition legislation. By then, though, the movement’s demands have expanded to include an independent investigation into alleged police brutality against protesters, the unconditional release of those detained and greater democracy in city elections.

NOVEMBER 2019: Protesters occupy and barricade several university campuses for several days and battle police outside in some of the most violent clashes in the months of protests.

NOVEMBER 24: The pro-democracy opposition wins a sweeping victory in district council elections across the city of 7.5 million people. The results buoy the protesters, but pro-Beijing parties remain in control of the legislature, where only half the members are elected by popular vote.

SPRING 2020: The protests ease somewhat in the weeks following the election and are further slowed by the coronavirus outbreak. The arrest of 15 prominent pro-democracy activists in mid-April sparks small protests in shopping malls that are broken up by police, who cite virus-related limits on the size of public gatherings.

MAY 28: China’s National People’s Congress ratifies a decision to develop national security laws for Hong Kong. Chinese and Hong Kong leaders say the protests created an urgent need for such laws. Pro-democracy activists and many legal experts fear a further erosion of ?one-country, two systems.? The laws are expected to be enacted by the end of the summer.

There should be accountability for crimes like Daniel Pearl’s murder: UN spokesperson