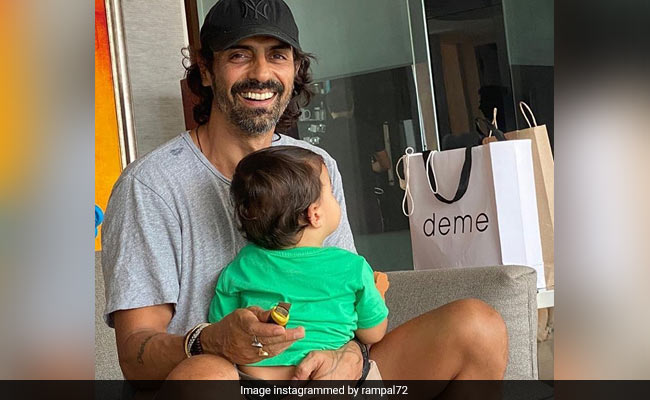 Actor Arjun Rampal, who moved back to his Mumbai residence from Karjat last month, shared an adorable picture of himself and his little son Arik on Instagram on Monday. Arjun, who occasionally updates his Instagram feed with pictures of the little munchkin, shared another glimpse of his day spent with his son and called him his “homie” in the caption. In the photograph, Arjun can be seen smiling with all his heart for the camera while holding Arik, who can be seen sitting on his lap. However, Arik’s face isn’t clearly visible in the picture. Sharing the photo, Arjun wrote: “A day well spent.”

Arjun, after arriving in Mumbai last month, met his daughters Mahikaa, 17, and Myra, 14 and shared a post for them. He Instagrammed a picture of themselves and wrote: “Finally time with my beauties. #daughters.” Mahikaa and Myra are Arjun’s daughters with ex-wife Mehr Jesia.

In one of his previous posts, Arjun shared a picture from his “crawling combat” with his little son and captioned his post like this: “If u can crawl, I can crawl. Crawling combat with Arik.”

Arjun Rampal was last seen in J P Dutta’s Paltan, which also featured Jackie Shroff, Sonu Sood, Harshvardhan Rane, Esha Gupta and Sonal Chauhan. He has featured in a number of films such as Dil Hai Tumhaara, Asambhav, D-Day, Chakravyuh, Inkaar, Om Shanti Om, Rock On!, Housefull, Raajneeti and Ra.One, in which he co-starred with Shah Rukh Khan. The actor has not announced his next project yet.

Anesthesiologists shift practice from OR to ICU during pandemic