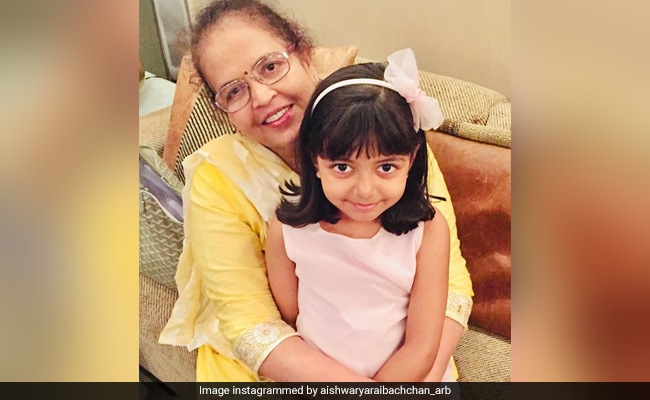 On her mother Brinda Rai’s birthday, Aishwarya Rai Bachchan posted a set of adorable pictures on her Instagram profile. One of the photographs also featured Aishwarya and Abhishek Bachchan’s daughter Aaradhya. In the picture, Aaradhya can be seen smiling with all her heart as she poses with her grandmother. Aishwarya Rai Bachchan added an equally cute caption to her post and she wrote: “Our Darling mommy – Doddaaa. We love you our birthday girl. Shine on.” The comments section was flooded with wishes for Brinda Rai.

Earlier this week, the Internet found a throwback picture of Aishwarya Rai Bachchan, in which she could be seen the eating a meal with her mother Brinda Rai. Aishwarya could be seen wearing her Miss World crown in the picture.

On the professional front, Aishwarya Rai Bachchan was last seen in the 2018 musical Fanney Khan, co-starring Anil Kapoor and Rajkummar Rao, which was a box office debacle. She also dubbed for the Hindi version of Disney’s Maleficent: Mistress Of Evil. She will next be seen in Gulab Jamun, co-starring her actor-husband Abhishek Bachchan. The film will be produced by Anurag Kashyap.

She has also signed a film with Mani Ratnam, which is based on Kalki Krishnamurthy’s popular historical novel

Brother's Day 2020: Wishes, Quotes To Share With Your Loving Brothers