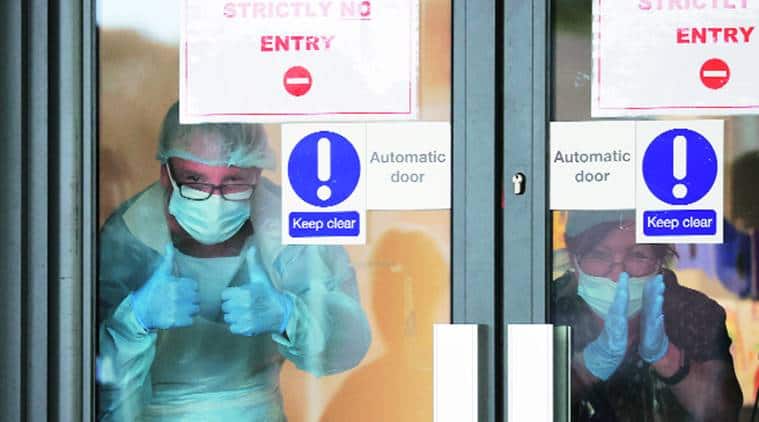 
NHS workers at a hospital in Liverpool. (Photo: Reuters)

“Healing will take a very long time because we all are grieving in isolation. We were unable to say goodbyes and could not attend the funeral. Memories of playing golf and walking dogs with him, our childhood together, keep flashing before my eyes.”

That was Dr Sukhbir Singh Rayat, grieving for cousin Dr Manjeet Singh Riyat, the first Sikh consultant for accident and emergency (A&E) at the Royal Derby Hospital, who died of Covid-19 on April 20.

Like 52-year-old Riyat, hundreds of Black, Asian, Minority Ethnic (BAME) staff of the National Health Service (NHS) have been in the frontline of Britain’s battle against the pandemic.

Indians constitute 43.3 per cent of the NHS workforce of 150,000 doctors. And though the risks this time are enormous, they have soldiered on.

A new analysis of NHS data of Covid deaths from March 1 to April 21 — authored by Dr Robert Aldridge of the UCL Institute of Health Informatics and Dr Delan Devakumar of the UCL Institute for Global Health, it was published in Wellcome Open Research — found that the likelihood of death from Covid-19 is “significantly higher” among BAME groups than the general population. The analysis factored data on age, region, ethnicity.

Of the deaths in minority ethnic groups, the analysis found that the largest numbers were among Indian (492 deaths) and Black Caribbean (460 deaths) groups.

Dr Onkar Sahota, a general practitioner and Chair of London Assembly’s Health Committee who represents the Punjabi-density areas around Southall, has called upon the government to set up a public enquiry, pointing that the “disproportionately high death rate from Covid-19 among the BAME community is worrying and raises serious questions which demand answers”.

Dr Chaand Nagpaul, Chair of the Council of British Medical Association, asked for “appropriate risk assessments” given the staggering number of deaths among BAME doctors and healthcare workers.

On why so many Indian and PIO medics were succumbing to Covid-19 in the UK, British Association of Physicians of Indian Origin (BAPIO) founding president and paediatrician Dr Ramesh Mehta told The Sunday Express: “There are about 65,000 doctors of Indian-origin working for NHS. We are the backbone. Since more BAME people are working in frontline services, they are like soldiers who face the bullets first. Of 32 doctors who have lost their lives, only two were White.”

The first Indian NHS worker to die of Covid-19 was East Bourne District General Hospital pharmacist Pooja Sharma (33) on March 26. It was a double tragedy for the family — she and her father Sudhir Sharma, a Heathrow immigration officer, died with 24 hours of each other.

Her brother Aman told media persons: “My sister was the superstar of our family. She had an irresistible laughter, sense of humour and good nature”. Her childhood friend Amarjit Aujla remembers her “contagious laughter” and “random calls that brightened up” the day.

The first PIO doctor to die of Covid-19 in the UK was Dr Jitendra Rathod. He was a heart surgeon at University Hospital Wales, Cardiff, where he had spent 25 years. Dr Rathod, 62, was self-isolating due to a pre-existing health condition but died of complications caused by Covid-19.

Joseph Varkey, the bereaved husband of Philomina Cherian, a 62-year-old nurse at John Radcliffe Hospital in Oxford, regrets not being able to bid her a final farewell on April 30. Philomina, originally from Kerala, had bought a house there and planned to retire soon.

“It was really difficult to see her go like this,” he said. A mother of three, Philomina served the NHS for 40 years.

At 80 and still working, Dr Mohinder Singh Dhatt of Slough was one of the longest serving GPs in Berkshire. He died on April 28 after contracting Covid. His daughter, Dr Mini Dhatt, also a general practitioner, said her father worked for 54 years in the NHS.

Septuagenarian Dr Kamlesh Kumar Masson, who gave 47 years to the health service in the UK, died of Covid on April 16. Dr Masson founded Milton Road Surgery in Grays, Essex, in 1985 and worked there until 2017, after which he continued locum work across Thurrock and Basildon.

Dr Poornima Nair from the 1981 batch of the Frank Anthony Public School, Delhi, breathed her last on May 12 after a long battle with Covid-19 at North Tees Hospital. She was a GP at the Station View Medical Centre, Bishop Auckland, Durham.

“She felt no pain and my father was with her in her final moments. Thank you for all your thoughts and prayers,” posted Varun on Poornima’s Facebook page the day she died.

Scroll down a little and there’s unmissable sign of love for life. A picture of “Sumptuous crispy murukkus. Mummy’s special recipe!!” and a series of colourful ethnic jewellery, neckpieces and danglers pop up.

It was more than just tributes for 44-year-old Anujkumar Kuttikkottu Pavithran, a nurse at Boston Hospital in Lincolnshire. The local Kerala Samaj took responsibility of conducting the final service as his friend Jerry Varghese’s fundraiser reached £47,000.

“During the unprecedented Covid crisis, Anuj worked day and night when he contracted this illness,” Varghese said. Anuj died on April 27. The fundraiser was set up to help with Anuj’s funeral costs as well as to support his wife, Sandya, also a student nurse, and their two children.

On April 17, “kind, generous and gentle soul” Vivek Sharma lost his life to coronavirus. He was an occupational therapist at Medway Community Healthcare, Kent.

Consultant paediatrician Dr Rajesh Kalraiya of Queen’s Hospital, Romford, died of Covid-19 on April 15. He was working as locum in Romford when he fell ill. His 40-year-long spell at NHS earned him huge respect.

BAPIO founding president Dr Mehta, who is also mourning the loss of his friend and colleague Dr Kalraiya, doesn’t deny that besides other contributing factors to the morbidity rate among the PIOs, Indians find it difficult to say ‘no’ even when the going gets tough. “For some, it’s moral obligation, for others it may be fear of losing their jobs.”

The risks remain, but the fight goes on.

Dubai port explosion: What we know about Jebel Ali Port blast so far