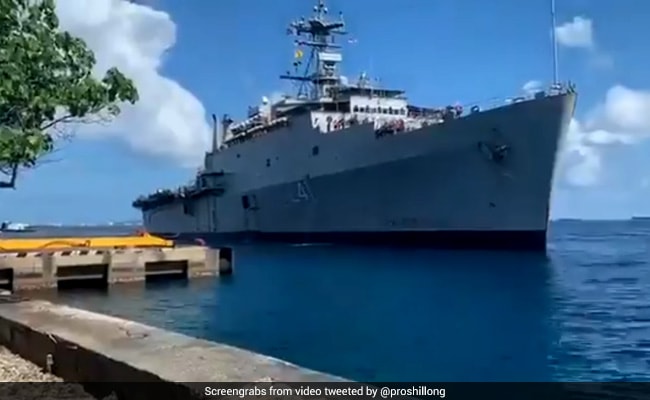 Indian Navy Ship Jalashwa on Sunday safely docked at the harbour in Tuticorin on Tuesday bringing back 700 stranded Indian nationals from Male.

With this voyage, INS Jalashwa alone has so far repatriated around 2,700 Indians from the Maldives and Sri Lanka under Operation ”Samudra Setu”.

#INSJalashwa arrives in Tuticorin port with 700 Indian nationals evacuated from #Maldives. So far 2874 Indians have been repatriated in Op #SamudraSetu.#VandeBharatMission#हरकामदेशकेनाम#IndiaFightsCorona@DefenceMinIndia@indiannavy@SpokespersonMoD@DDNewslive@airnewsalertspic.twitter.com/Ad2hQXE5fI

On June 1, the vessel repatriated approximately 700 Indians from Colombo in Sri Lanka to Tuticorin in Tamil Nadu. This is the third trip to the Maldives by INS Jalashwa.

The rescue mission is a part of Operation ”Samudra Setu” under the Vande Bharat Mission, which has so far facilitated the evacuation of nearly 2,700 people from Male twice on May 8 and May 16.

Under the second phase of the naval repatriation mission, INS Jalashwa with the base at Visakhapatnam would voyage for evacuation in Bandar Abbas (Iran) after Male.