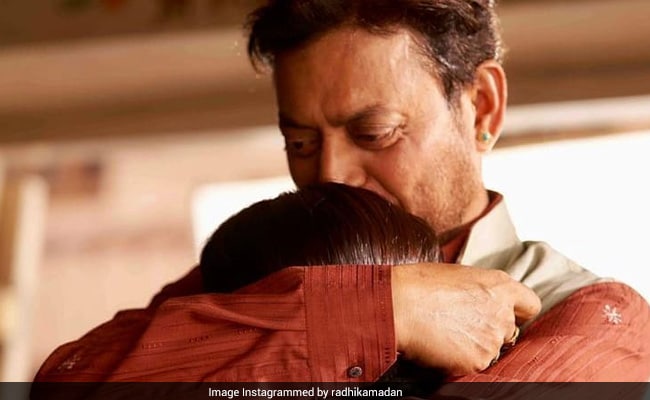 Irrfan Khan’s Angrezi Medium co-star Radhika Madan shared a film still from the film and remembered the late actor, on Sunday. Irrfan Khan died on April 29 this year. He was 53. Radhika, who played the role of Irrfan Khan’s daughter in Homi Adajania’s film Angrezi Medium, shared a warm picture of hugging Irrfan Khan. Remembering Irrfan Khan, Radhika borrowed the first line from the song Laadki by the music composer duo Sachin-Jigar, and wrote, “Teri laadki mai,” and dropped a heart emoticon. In the picture, Irrfan Khan can be seen kissing Radhika’s head as she hugs him. Take a look:

Earlier, Radhika Madan wrote a warm note for her Angrezi Medium co-star Irrfan Khan on Instagram. Radhika shared a set of pictures featuring herself and Irrfan Khan and wrote, “I don’t know what to say… my heart aches when I write this. He was one of the strongest people I knew, a fighter. I am really grateful that our paths crossed in this lifetime. He is and will always be an inspiration to me and many. A legend. The man who changed the wave of the Indian film industry. May his soul rest in peace. Love you Irrfan sir. It was a privilege knowing you.” Take a look:

Earlier, in an interview with The New Indian Express, Radhika Madan spoke about her experience of working with Irrfan Khan. She said, “We were really conscious and used to work according to his health. We’d always prioritise his scenes and wrap up early. We took it one day at a time, since nobody knew if we would finish this film. But his love and his passion for his art drove him and us. He didn’t let our spirits droop for a moment. It was the coolest set ever. Everybody used to laugh and have fun.”

Irrfan Khan was diagnosed with cancer in 2018, after which he underwent treatment in London. Irrfan Khan returned to India briefly and filmed Angrezi Medium, which released in March. Angrezi Medium remains Irrfan Khan’s last film.