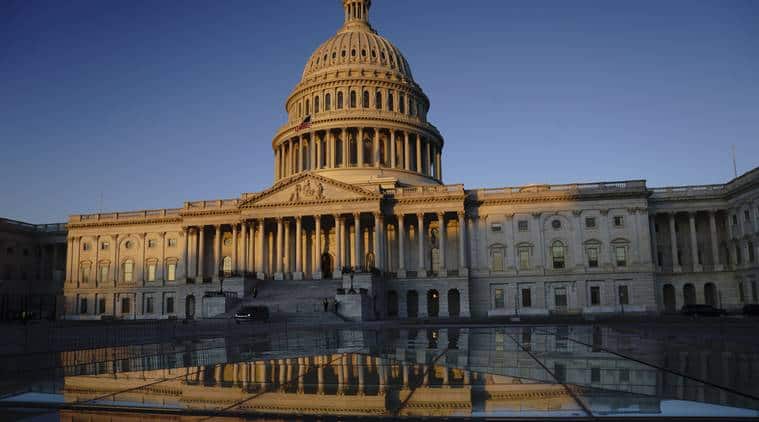 
In this file photo, the US Capitol is seen at sunrise in Washington. (AP Photo)

More than perhaps any president in modern history, Trump has been willing to ignore, defy and toy with the legislative branch, asserting power and breaking norms in ways his predecessors would hardly dare.

Republicans shrug it off as Trump being Trump, leaving Democrats almost alone to object. While the Democratic-run House took the extraordinary step of impeaching the president, the GOP-controlled Senate acquitted. Over time, there’s been a noticeable imbalance of power, a president with few restraints drifting toward what the founders warned against.

Think of it as “the incredible shrinkage” of Congress, said historian Douglas Brinkley.

“It’s created this massive void in our democracy,” Brinkley told The Associated Press.

As Trump seeks reelection with the country facing crises unseen in a lifetime, Congress is confronting questions about its ability to shape the direction and future of the nation.

This week, the Supreme Court weighed in, acknowledging the “clash between rival branches of government” over Trump’s financial records. Chief Justice John Roberts, writing for the majority to return the case to lower courts, said that while the subpoenas for the documents were broad, the president went too far in claiming virtual immunity from congressional oversight.

“What was at stake is, is the president above the law?” said House Speaker Nancy Pelosi, D-Calif., taking the ruling as a win for her end of Pennsylvania Avenue.

The erosion has taken place in ways large and small.

First, Trump took money for his promised border wall with Mexico without lawmaker approval, circumventing Congress’s bedrock power over spending. Then he began to fill top posts with officials who did not have the support of senators, negating their role to advise and consent on nominees.

And when the House launched investigations that led to impeachment — the ultimate check on the executive — Trump refused to comply with subpoenas, declaring them invalid. The courts are now left to decide.

But typically presidents only go so far, knowing Congress is eyeing their every move, ready and willing to intervene. The executive knows they may soon need votes from lawmakers on other matters, creating a need for cooperation.

Trump rejects that model outright, treating the Congress as support staff to his presidency and relying on sheer force of personality to shape the government to his will. A simple Trump tweet can cower critics and reward loyalists all the same. His power only grows as lawmakers, particularly Senate Republicans, stay silent.

The result is a an exhaustive, head-spinning era that’s turning Capitol Hill into a spectator stand of those watching, reacting and shaking a fist as their institutional prerogative is slipping away.

“There’s a deeper institutional question,” said Sen. Angus King, the independent from Maine. “The Congress is abdicating its responsibilities to the executive.”

The singular challenge to Trump comes from Pelosi, a seasoned legislator who captured the Democratic majority after Trump’s first two years in large part because voters longed for a check on his power. In the Senate, Majority Leader Mitch McConnell has taken a different tack, working with the Republican president or at times around him as GOP senators avoid direct confrontations.

“Congress is evolving,” said Sen. Marco Rubio, R-Fla., once a Trump rival for the White House.

Rubio acknowledges the Congress is a different place than when he arrived a decade ago on the tea party wave. He wishes, at times, that Congress would be more assertive.

“America is going through a transformational moment, as we have many times in our history,” he said. He notes that lawmakers still join forces, including on his legislation on human rights in Hong Kong. “It’s easy to watch what is happening here today and think these are the worst times in congressional history. That’s not accurate.”

But day in and day out, Congress is mostly unwilling to pull together, Republicans declining to join Democrats to rebuke the president when he overreaches or confront him with bipartisan legislation to force his hand.

“There isn’t even a whimper out of the Republican side,” said Sen. Dick Durbin of Illinois, the assistant Democratic leader.

“Every president does that — they will push their authority as far as they can,” Durbin said. “For Trump, it has been nonstop.”

The forces diminishing the Congress have been at work for some time, as relentless partisanship leave lawmakers unable to meet the moment and produce solutions for a splintered nation.

Polling shows Americans overwhelmingly support a legislative response to many top issues. They back changes to policing tactics in the aftermath of mass demonstrations over the deaths of Black Americans at the hands of law enforcement. They support background checks on firearm purchases to stem violence and mass shootings. And they want immigration law changes, particularly to protect young immigrants from deportation.

Over and over, Congress failed to deliver. In the void and buoyed by it, Trump extends his reach.

Sarah Binder, a professor at George Washington University, said the Constitution’s separation of powers can only take the country so far. “Parchment doesn’t stop these battles,” she said.

When people ask incredulously if the president can do something he has just done, she said, “Presidents can get away with this if there’s no broader public or his own party reining him in.”

Brinkley warns that unless Congress exerts itself, with Pelosi’s House and McConnell’s Senate pulling together to bring the nation to common ground, Trump will press on, emerging as the nation’s first “authoritarian” executive.

“Those are the people’s houses. That’s where the people’s voices are heard,” he said. “They need to show the American people that Capitol Hill is working.”

China points to shrimp as coronavirus carrier after salmon debacle