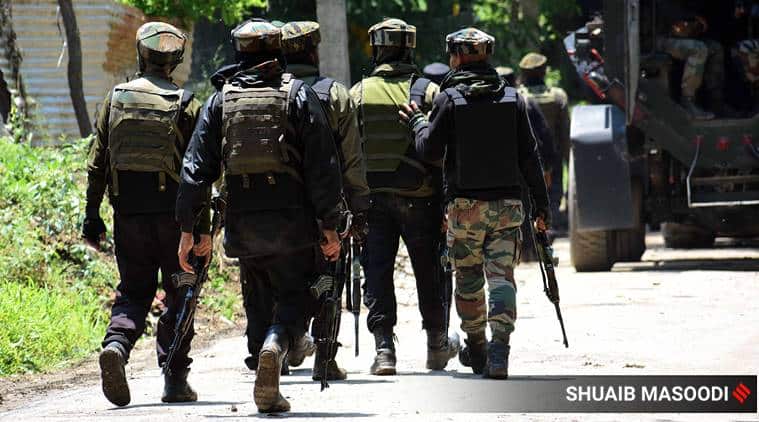 
Last week, three members of a family, all linked to the BJP, were killed in a militant attack on Wednesday evening in North Kashmir’s Bandipore. (Express photo by Shuaib Masoodi/File)

An encounter broke out between militants and security forces in Sopore area of Jammu and Kashmir’s Baramulla district on Sunday. According to the Police, the encounter started at the Rebbaan area of Sopore.

“Encounter has started at #Rebban area of #Sopore. Police and security forces are on the job. Further details shall follow,” Kashmir Police zone said on Twitter. Authorities have suspended mobile internet in Sopore.

Last week, three members of a family, all linked to the BJP, were killed in a militant attack on Wednesday evening in North Kashmir’s Bandipore, leading to the arrest of their entire security detail. The attack happened right outside the Bandipore Police Station, when the three were at the family shop, run out of their home.

The dead included a member of the BJP state executive committee, Sheikh Waseem Bari, 27, and his father Sheikh Bashir Ahmad and brother Sheikh Umar, who were also office-bearers of the party.

The police later said that the Lashkar-e-Taiba was behind the attack. Speaking to reporters in Bandipore, Inspector General of Police (IGP), Kashmir, Vijay Kumar said they had identified the two militants involved in the attack. “One of them is Abid (a local militant) and another is a foreigner,” he said.

In another encounter, a militant and an Army soldier were killed while two security forces personnel were injured in a gunbattle in South Kashmir’s Pulwama last week.

Mamata Banerjee speaks to farmers protesting at Singhu border, assures them of her support