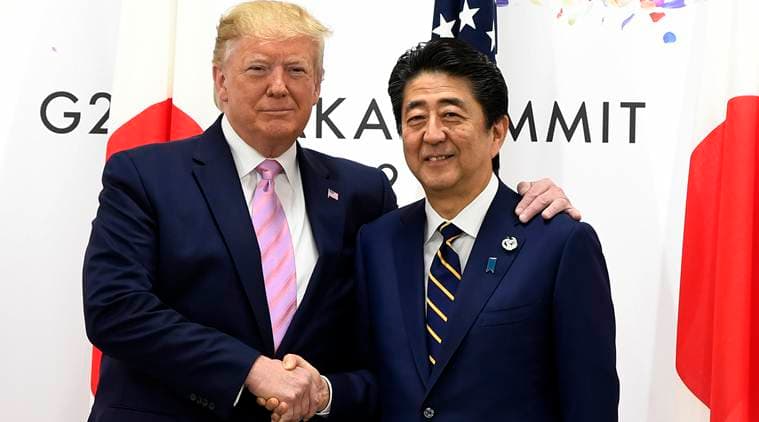 
US President Donald Trump with Japanese Prime Minister Shinzo Abe during a meeting on the sidelines of the G-20 summit in Osaka, Japan in June 2019. (AP/File)

Japan’s top government spokesman said Thursday that the country is considering attending the Group of Seven summit meeting, if the US reschedules the canceled gathering.

Chief Cabinet Secretary Yoshihide Suga was responding to a question about President Donald Trump’s tweet Wednesday that he is considering rescheduling the canceled G-7 meeting with world leaders in the U.S., because it would be a ?great sign to all? of things returning to normal during the coronavirus pandemic.

Trump had scheduled the G-7 summit for June 10-12 at Camp David, the presidential retreat in Maryland. The summit was canceled it in March because of the pandemic, and Trump said the leaders would confer by video conference.

Suga said Thursday that he interpreted Trump’s tweet as ?an expression of the President’s intention to normalize the global economy quickly.?

He said his understanding is that details such as the dates and format of the meeting are still being studied by the U.S. as host nation.

Suga said Tokyo and Washington are in discussion, but declined to comment further.

Japan is still partially under a coronavirus state of emergency. Abe plans to announce lifting of the measure in three of the remaining eight prefectures later Thursday, while keeping it in place in Tokyo and four other areas.

This Sweet And Refreshing Mango Chutney With Mint Screams Summer

Small plane crashes in Indonesia’s Papua; search on for crew

Get someone jabbed against Covid-19 and get a gift token, Swiss govt says