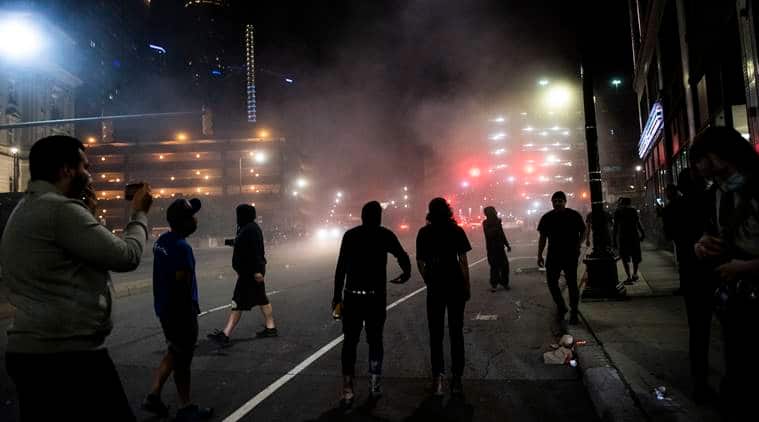 
In some incidents, members of the news media appeared to be targeted, by police and protesters alike, the USA Today reported. (Nicole Hester/Ann Arbor News via AP)/

From the East Coast to the West, journalists covering the widespread protests in the US after the killing of African-American George Floyd are facing assaults, being shot at, tear-gassed and arrested, as a leading media rights group urged authorities to ensure that reporters do their job safely without fear of injury or retaliation.

Floyd, a 46-year-old African American restaurant worker, died in Minneapolis on Monday after a white police officer pinned him to the ground. Video footage showed the officer kneeling on Floyd’s neck as he gasped for breath, sparking widespread protests across the US.

The police officer has been fired, and on Friday was arrested and charged with third-degree murder and manslaughter. As protests across the US raged over police brutality and the killing of Floyd, police have used force to disperse violent demonstrators.

In some incidents, members of the news media appeared to be targeted, by police and protesters alike, the USA Today reported. From Minneapolis to Washington DC, from Louisville to Las Vegas, reporters are facing assault and arrest while reporting on widespread protests and unrest, the CNN reported.

“I hat we think happened is I took a rubber bullet to the face. It exploded my eyeball, which has now been patched back together but who knows if it’ll need more surgery. My vision is gone no matter what it winds up looking like scar wise,” Tirado tweeted on Saturday.

“I am permanently blind in my left eye, and the docs absolutely refuse to let me go back to work for they say six weeks. I’m definitely not allowed to be near smoke or gas,” she tweeted. The Denver Post said photographer Hyoung Chang was covering a protest on Thursday night in downtown Denver when police fired two pepper balls directly at him.

Another disturbing episode took place on Saturday, when Ian Smith, a photojournalist for KDKA TV in Pittsburgh, said he was “attacked” by protesters downtown, the CNN reported. “They stomped and kicked me,” he wrote in a tweet from the back of an ambulance.

“I’m bruised and bloody but alive. My camera was destroyed. Another group of protesters pulled me out and saved my life. Thank you!” Meanwhile, the US-based Committee to Protect Journalists (CPJ) on Saturday condemned reported attacks by police and protesters against journalists covering the demonstrations across the country.

“Targeted attacks on journalists, media crews, and news organisations covering the demonstrations show a complete disregard for their critical role in documenting issues of public interest and are an unacceptable attempt to intimidate them,” CPJ programme director Carlos Martinez de la Serna said in the statement.

The journalist rights group called on city authorities across the nation “to instruct police not to target? journalists and ensure they can report safely on the protests without fear of injury or retaliation.” The CPJ is also investigating reports of attacks on and arrests of journalists in Atlanta; Las Vegas; Louisville, Kentucky; and Washington covering the unrest.

From the state capital in Tallahassee to Tampa, Miami, and other Florida cities, protests and demonstrations escalated on Saturday.

Elsewhere, the protests stretched from Washington, DC to Atlanta to Los Angeles, starting out peacefully but also fueled by fires and destruction, leading to curfews and arrests, Florida Phoenix reported.

WHO approves Sinovac, second Chinese-made Covid vaccine to get listed

US pledges support for Ukraine amid tensions with Russia