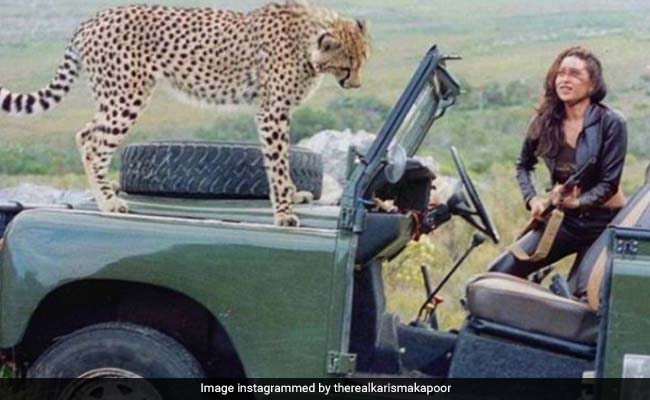 Flashback Friday means a throwback post from Karisma Kapoor. And by now we know that Karisma loves to post old film stills with a question for her Instafam attached. Her new Flashback Friday post is no different, actually. Karisma just shared a BTS photo from the shoot of what appears to be her 2000 film Shikari and oh boy, she had all reasons to be scared and hence, look scared. In the throwback photo, Karisma shares the frame with a cheetah – no, there’s no special effects added to the photo – and we can totally relate to Karisma writing about being “scared and mesmerised” during the shot. Here’s what Karisma Kapoor wrote: “This is not computer generated, no VFX, it’s really me with this beautiful cheetah in the same frame! And yes I was scared yet mesmerised at the same time. Guess the film. Hint – shot in South Africa #memories.”

Karisma co-starred with her frequent collaborator Govinda in the 2000 film Shikari.

In the past, Karisma Kapoor has also shared these quizzes as part of her Instagram “guessing game”. Well, this was an easy one – who doesn’t know Karisma’s iconic dance moves from Dil Toh Pagal Hai?

Sometimes, Karisma delves so deep in her throwback treasury that she has “no recollection which film, when or where this pic was taken”. LOL.

Here’s when Karisma Kapoor and Govinda danced around Eiffel Tower. No points for guessing this is a film still from Hero No 1.

Karisma Kapoor was last seen in 2012 film Dangerous Ishhq, after which she featured in special roles in films such as Bombay Talkies and Zero.

Street Food Of India: How To Make Fried Chicken Momos And Chutney At Home

Indian Cooking Tips: This Odia-Special Dahi Baingan Will Add Burst Of Flavours To Your Palate