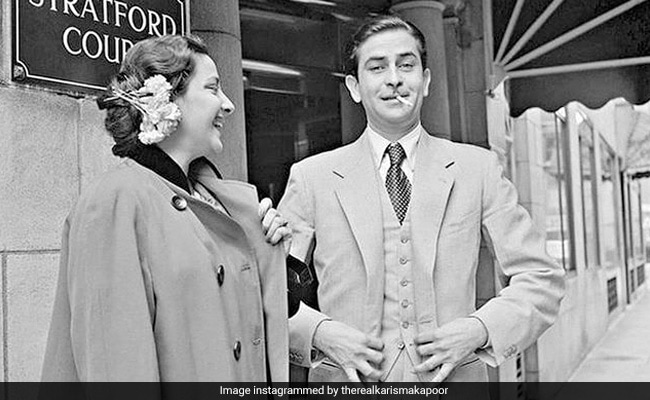 Actress Karisma Kapoor, on Sunday, shared a rare picture of her grandfather, veteran actor-director Raj Kapoor on Instagram. The picture, featuring the actress’s “handsome Dadaji,” within no time, stole the spotlight on the photo-sharing platform. In the black and white memory, Raj Kapoor can be seen posing for the camera alongside who appears to be late actress Nargis. They can be seen standing outside Stratford Court Hotel in London. Sharing the picture, Karisma Kapoor, who is the daughter of Raj Kapoor’s son Randhir, wrote: “Our handsome Dadaji” and accompanied her post with hashtags such as #familylove and #legend. Reacting to Karisma’s post, her cousin Armaan Jain commented: “Absolute stud Nanaji.”

The Kapoors form a vast film dynasty – Rishi and Randhir Kapoor, sons of Raj Kapoor and grandsons of legend Prithiviraj Kapoor, belong to the third generation; Karisma, her sister Kareena and other cousins make up the fourth.

Kareena Kapoor’s feed proves that the actress loves posting amazing blasts from the past on social media. On Father’s Day, she posted a really cute photo of herself and Randhir Kapoor from her childhood album, in which the duo can be seen twinning in polka dot outfits. “Dotty do…Happy Father’s Day, Papa. Love you,” she captioned the photo.

Before that, Karisma remembered her Chintu uncle – actor Rishi Kapoor who died in Mumbai on April 30 – by sharing this throwback post on Instagram:

Karisma Kapoor’s last Hindi film remains Dangerous Ishhq, after which she featured in special roles in films such as Bombay Talkies and Zero. The actress was last seen in the ALT Balaji and ZEE5 web series Mentalhood where she shared screen space with Sanjay Suri, Sandhya Mridul, Shilpa Shukla and Shruti Seth.