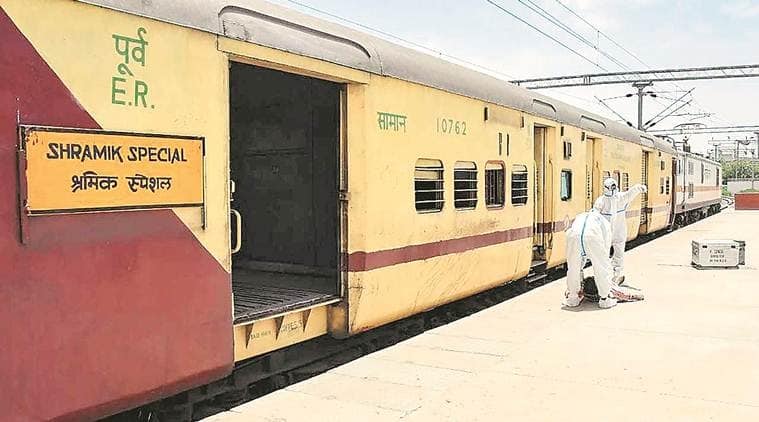 
According to the information department of the Gujarat government, a total of 971 Shramik Special trains have been run, between May 2 and May 28, to carry 14,13,000 migrant workers. (Representational Photo)

For the past three days, five groups of migrant workers from Odisha have been circling Kalupur railway station in Ahmedabad, in hopes of getting seats in Shramik Special trains and travelling home. However, their problem doesn’t lie in the alleged apathy of the government, but them being few in number.

According to officials, a total of 80 migrant workers from Odisha have registered for Shramik trains in Ahmedabad in the last one week, but at least 1,600 passengers are required to book a train to a particular state.

24-year-old Ajay Yadav is a migrant worker from Puri. He has been stuck in Rakhial of Ahmedabad for the past two months, along with five colleagues who are also from Odisha.

“We have been queuing outside the ticket reservation counter at Kalupur station, but the officials say that there are no trains to Odisha right now — neither Shramik Special trains nor special passenger trains. We have been told to wait till June 1 as we are very few in number, but even those trains won’t go to Odisha,” said Yadav, who works in a packaging company.

18-year-old Manish Sahoo, from Bhubaneshwar in Odisha, has also been waiting at the Kalupur railway station. “There are 12 of us who want to go home, but police and officials have said that there is no train for us. We have been given the option of travelling to Odisha via another state, but there is only one Shramik train today (Friday) for Uttar Pradesh,” said Sahoo.

According to the information department of the Gujarat government, a total of 971 Shramik Special trains have been run, between May 2 and May 28, to carry 14,13,000 migrant workers to Bihar, Uttar Pradesh, West Bengal, Madhya Pradesh, Chhattisgarh, Jharkhand and Odisha. Among these 971 trains, 83 have gone to Odisha since May 2, as per officials.

Speaking to The Indian Express, RG Desai, in-charge officer of Kalupur police station, said, “We have received a lot of requests from Odisha workers in the past one week, but the problem is that their number is not reaching 1,600. We are trying to make them reach any other state from where they can reach home.”

Another official from the Mamlatdar office said, “Since a cyclone warning was sounded last week, Shramik trains to West Bengal were cancelled and workers from Odisha couldn’t board those trains. They will have to wait till June 1 for bookings in the regular passenger train in order to travel back home.”

‘Whatever was done, was a sacred duty’: Kiran Bedi after being removed as Puducherry L-G

2 more held in OSA case, police say information on troops given to Chinese