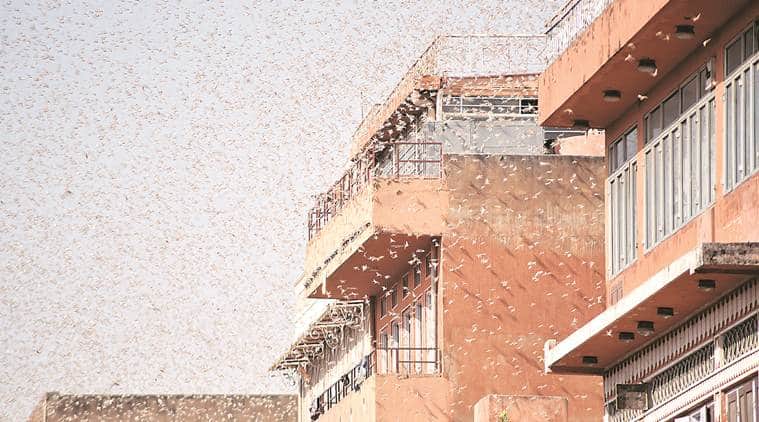 
A swarm of locusts in a residential area in Jaipur. (Express photo by Rohit Jain Paras)

Large swarms of locusts on Monday overran several residential localities of Jaipur. This month is the first time since the early 1990s that locust swarms from Western Rajasthan have made their way into Jaipur, said officials from the Agriculture Department, adding that similar swarms of the crop-devouring insects would likely be seen in the coming days.

“Since the last one year, locust swarms have resulted in serious losses for farmers. We believe this time the swarms came all the way to Jaipur because the locusts couldn’t find any crop to consume—most of the crop has already been harvested,” said BR Karwa, deputy director at the Agriculture Department

“On May 22, similar locust swarms had entered Jaipur. This was the first instance since 1993 that locust swarms entered the city,” he said.

The swarm, originating in North-West Pakistan, passed through Barmer and Jaisalmer districts before arriving at Jaipur through Nagaur and Sikar.

“The locusts went over localities such as Vidhyadhar Nagar and Shastri Nagar before flying towards Dausa. There were lakhs of locusts coming from western Rajasthan after originating in Pakistan,” said Karwa.

He added that the state government, along with the Centre, had deputed several teams to control the locust attack through the spraying of pesticides.

“After staying in Jaipur for a few hours, the swarm went towards Dausa. Generally locust swarms arrive during winters but this time it has started early. We are expecting more such swarms in the coming days,” said Karwa.

Locust attacks have been a major concern in Rajasthan since last year, with swarms damaging large portions of crops.

Free vaccine for next priority group being discussed: Harsh Vardhan

Chhattisgarh: Cousins killed by family for wanting to marry each other