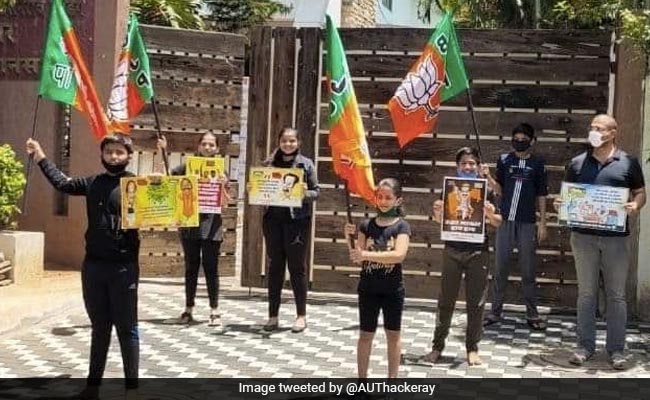 Several BJP leaders across the state held protests in their own areas.

The Shiv Sena-Congress-Nationalist Congress Party government in Maharashtra came under attack from the opposition BJP on Friday over its handling of the COVID-19 pandemic in the state. The BJP held a protest against the state government, alleging it had failed to contain the crisis. Maharashtra has the highest number of COVID-19 patients in the county with Mumbai alone accounting for more than one-fifth of coronavirus cases in India.

The protest was led by former Chief Minister and Leader of Opposition Devendra Fadnavis. Several BJP leaders including state BJP President Chandrakant Patil also gathered at the Maharashtra BJP headquarters wearing black masks and stood at a distance from each other. Sharing pictures of the protest, Leader of Opposition Devendra Fadnavis tweeted, “Most cases, most deaths. The healthcare system has completely collapsed. This is the abject failure of the Government. We have always cooperated with the state government. But how much will the people have to tolerate? I participated in the “Maharashtra Bachao” agitation at the state BJP headquarters.”

But in pictures on Twitter children are seen participating in the protest with masks lowered. The photos of the children in the protest are not from the same location where the former Chief Minister protested.

Several BJP leaders across the state held protests in their own areas to highlight what they feel is an absolute failure of the government. But the idea of a protest during the lockdown, especially political protests involving children drew sharp reactions.

The Shiv Sena slammed the BJP for organising a protest during the lockdown.

“Absolutely shameful, what lust for power politics can make leaders do. Making kids stand in the heat, with their masks lowered, not covering the face for a political protest when we need to keep them safe and indoors. Corona ko bhul gaye, politics pyaara hai,” Cabinet Minister Aaditya Thackeray tweeted.

“One political party state unit has set a new low and a new world record- the only party in the world to indulge in politics and in spreading fear, hate and division when the world has forgotten all of it to help each other. This party has forgotten the pandemic,” he added in another tweet.

Aaditya Thackeray is a member of his father Uddhav Thackeray’s cabinet and is the minister for Environment, Tourism and Protocol in Maharashtra.