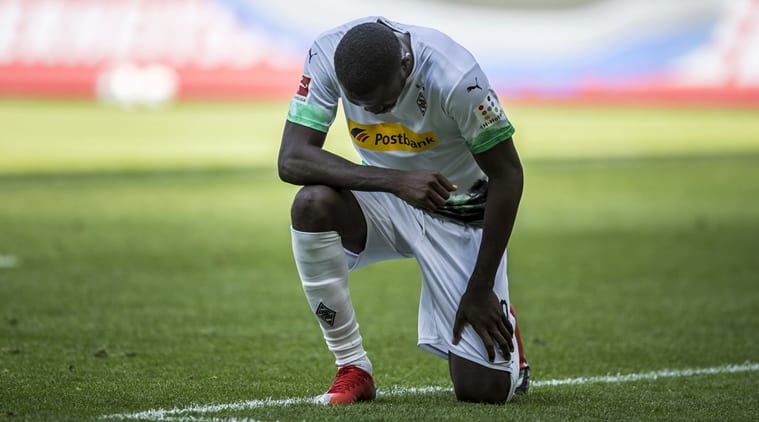 The 22-year-old Thuram headed in at the far post from fellow Frenchman Plea’s cross in the 41st minute after Florian Neuhaus had put the hosts ahead in the 17th with a solo run.

Thuram went down on his knee in memory of George Floyd, an unarmed black man who died in Minnesota after a white police officer knelt on his neck, sparking widespread protests in the United States.

Sebastian Andersson briefly cut the deficit for the visitors five minutes after the restart. But the hosts, playing fluid football in front of empty stands filled with cardboard cutouts of fans, were far superior, constantly finding space to attack.

Thuram, the son of 1998 World Cup winner Lilian Thuram, grabbed his second goal on the hour, tapping in at the far post after Plea threaded another pass through the Union defence.

Plea turned scorer himself with a well-timed left-footed shot to join Thuram on 10 goals this season and put Gladbach back in the mix for a Champions League spot with their first win in three games.

After 4 years of injury setbacks, Gladbach youngster Mamadou Doucouré finally made his debut for the club.

Marcus Thuram flew his shirt on the corner flag to celebrate and the @borussia_en squad joined in 💚🖤 pic.twitter.com/c4ysYbp4PC

The Foals, who next travel to Freiburg, are third in the standings on 56 points, ahead of Bayer Leverkusen on goal difference. RB Leipzig, fifth on 55, take on Cologne on Monday.

Bayern Munich lead the standings on 67 following their 5-0 demolition of Fortuna Dusseldorf on Saturday.

‘I respect him but don’t fear him’: Naseem Shah lies in wait for Virat Kohli

Barcelona agree to sell Arthur to Juventus, buy Miralem Pjanic from the Turin side

Differences between Dinesh Karthik-Andre Russell should be resolved: Brad Hogg