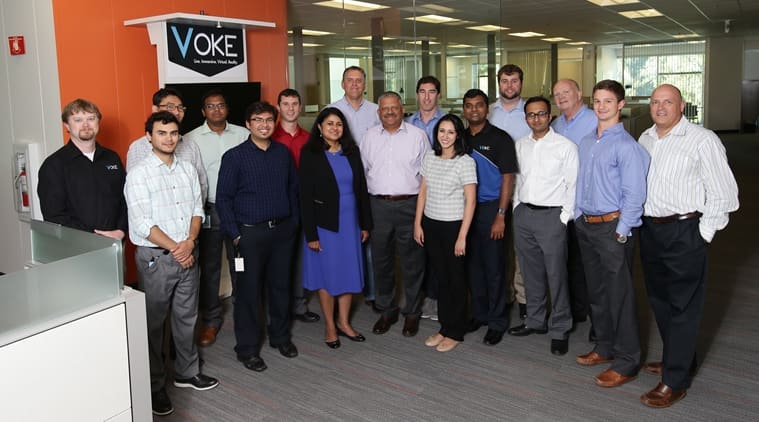 The Olympic Games, Euro 2020, Wimbledon, NBA, IPL… With all big sporting action on hold across the world, the big question that’s haunting fans is this: in these Covid times, when will they ever get to relive the stadium experience again?

They might find the answer in their own living rooms.

A couple from West Bengal is driving the advancement of Virtual Reality (VR) in sports that holds the key to the future of broadcasting in the post-pandemic age.

Sankar Jayaram, who grew up in Kolkata, met Uma from Durgapur at IIT-Kharagpur in the 1980s. He was pursuing a degree in Mechanical Engineering, and she was the first woman to be admitted to the department.

They went on to complete their PHDs at Virginia Tech and in 1994, established a VR lab at Washington State University. Somewhere during that timeline, Sankar missed a Seattle Seahawks NFL game, which made him wish he “could be at home, put on a headset, and feel as if I were in a stadium”. VR provided the solution.

Three decades later, the Jayarams, who work for top leagues in the US like NFL, NBA, and the PGA Tour, have their hands full as VR is expected to bridge the Covid gap between fans and the stadium.

“Any disruption is also an opportunity,” says Sankar. “Fans will miss going to the stadium. In a VR headset, they can be immersed in the game, get a courtside seat, which is usually reserved for VIPs, and get a partial feel of being at the game and almost ‘in’ the game.”

The Jayarams founded VOKE, a Silicon Valley company that was acquired by Intel in 2016. At VOKE, they worked on the technology to create and stream VR 360 media. Special, semi-hemispherical cameras, that had lenses pointing in all directions, were installed at key locations in a stadium. The videos from these cameras would be simultaneously captured, and stitched together to produce an almost seamless experience of a video that goes all the way left to right.

Users can then put on a headset and choose their viewing positions. Sit courtside next to Hollywood A-listers or in the owners’ box. Choose to go under the basket for a dunk, or behind the glass. Or look at quick replays or live statistics.

Sankar and Uma also produced VR streams from the 2018 Winter Olympics with Intel, which had big plans for the Tokyo Games before they were postponed by the pandemic.

Working in the field since the 90s, when it was still largely a thing of science-fiction and marketing gimmicks, Sankar has seen Virtual Reality evolve.

“The computer we needed to drive a single VR headset cost Washington State University $500,000 in 1997! We have multiples of that capability on our phones today,” says Sankar, who recently left his post as the Chief Technical Officer at Intel to establish his next startup, Quintar.

The 1997 headset weighed 2.7kg and had counterweights on the back to allow some comfort while wearing it.

Then, there was the headset. The team had to build its own device to get things started. It weighed 2.7kg and had counterweights on the back to allow some comfort while wearing it. They are much lighter now, but the bulky nature of headsets still remains VR’s biggest challenge.

“There are several challenges with the headsets today. Size, weight and price aside, there are also limitations in heat dissipation, field of view, resolution and battery life. Outside of these tech issues, there is the issue of isolation. Sports and entertainment experiences are typically social and being isolated in a VR headset or seeing avatars of friends is not very appealing.”

According to Sankar, the advent of Augmented Reality (AR) and Mixed Reality (MR) could alleviate these problems.

“There is significant development happening in AR glasses, which are projected to be like slightly bulky sunglasses and are expected in the next 3-4 years. One key aspect of all this is that VR/AR/MR/XR (extended reality) — whatever name you want to give it — will really take off only there is a reason for a common person to have it and experience something they cannot do without,” he says.

“Covid-19 could be a shot in the arm for these remote but immersive experiences and as sport starts back up across the world with empty stadia, this is an opportunity for the XR community and the leagues, teams and rights holders, to engage fans in new and unique ways.”

When not working on ways to bring the stadiums to the fans, Sankar laments the absence of live sports. His adopted home teams of Washington State Cougars and the Seattle Seahawks are his favourites, but he is quick to serve reminders of his roots.

“I grew up playing cricket and hockey. I still watch cricket and am missing watching all these sports and also playing competitive cricket.”

50 on T20I debut: Where was Pakistan’s Haider Ali hiding?

Detectives find cause of Tiger Woods crash but won’t reveal