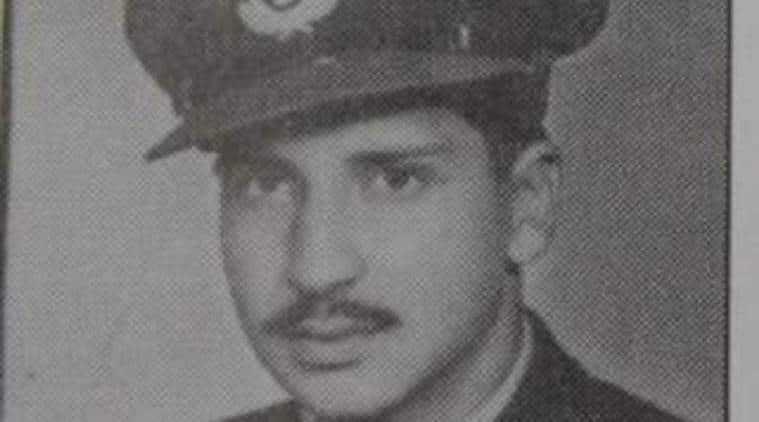 Air Force pilots by inclination, training and for reasons of professional pride are disposed to take risks to the extent of endangering their own lives to prevent civilian casualties. Flight Lieutenant Karan Sher Singh Kalsia, Raja of the small State of Kalsia (now in Haryana) made the supreme sacrifice by veering his stricken aircraft away from built-up areas. In the process he lost the opportunity to eject safely and was killed in the subsequent crash.

Educated at Doon School, that fine feeder institution for the armed forces, Karan embarked upon a military career after merging his state with the Indian Union. It became part of the Patiala and East Punjab States Union in 1948, joined Punjab in 1956 and is now in Haryana. He joined the 2nd Course of the Joint Services Wing (precursor of the National Defence Academy) at Clement Town, Dehra Dun, in June 1949. Opting for the IAF he was commissioned as a Pilot Officer with the 60th Pilots Course on 1st April 1953. Making his mark from the beginning, he won the Sword of Honour at the Air Force Academy as well as the President’s Prize in 1954 for standing first not just in his course but among all the four courses commissioned from various training institutions that year. His contemporaries, both at school and in the IAF thought very highly of him remembering him as a mature, serious person and a good sportsman.

Kalsia was allotted the fighter stream, at the time making the transition to jets from piston engine aircraft. A little over a year later he faced his first test when his de Havilland Vampire FB52 fighter-bomber experienced engine failure. He was able to make a successful ejection landing near village Ghasiwala in Sunam Tehsil of Sangrur district. Undeterred by the mishap, he flew on through the 50s rising to the rank of Flight Lieutenant.

In 1961 he was serving with No. 7 Squadron flying Hawker Siddeley Hunter fighter-bombers. The Battle-axes as they’re known is one of the oldest and most distinguished units of the IAF. The squadron has a long operational history stretching back to the Burma Campaign of World War Two. They continued their efforts on behalf of free India in the J&K operations of 1947-48. Converting to Vampires in 1949 they were the first to fly jet aircraft in Asia. Flying out of Halwara in 1965 the Battle-axes unloaded 218 rockets and 13,000 pounds of bombs on to ground targets causing extensive damage to the enemy.

7 Squadron’s finest hour was to come however in 1971 when it operated on both fronts. Multiple sorties were flown and strikes launched against targets in East Pakistan. Moving to the Western theatre on 6th December after helping achieve complete air supremacy over East Pakistan, the Battle-axes operated in turn from Hindon, Nal (Bikaner) and Pathankot. The squadron provided close air support to the ground forces constantly hitting Pakistani targets on the battlefield. In addition, interdiction sorties were flown preventing the movement of ammunition, fuel and warlike stores to combat zones.

After the war the unit converted to Mig-21 MFs. In 1985 they were the first to fly the Dassault Mirage 2000 multi-role fighter. It was with these formidable aircraft that the Battle-axes, operating from Trivandrum provided support for the successful Tri-Service intervention in the Maldives in 1988 making several passes over the islands in a show of force. During the Kargil War, 7 Squadron employed precision-guided munitions (PGMs) to pulverise Pakistani fortifications and dumps. Flying from Adampur airbase, Tiger Hill, Munto Dhalo and Tololing were pounded with laser-guided bombs and 1,000-pounders. In 2002 Pakistani-occupied positions on our side of the Line of Control (LOC) in Machhil sector were hit by PGMs. To this day the squadron’s pilots are inspired by the stirring example of Karan Sher Singh Kalsia.

Karan had, in his short career served with Numbers 1, 3 and 7 Squadrons. During his elementary flying training he had flown Tiger Moth, Harvard and Spitfire Mark XVIII piston-engine aircraft. Transiting to the jet age he served with units operating Vampire, Toofani (Ouragan), Mystere and Hunter fighters. He went to France for six months in 1957 for conversion training on the Dassault Mystere IVa fighter-bomber. They were the IAF’s first supersonic aircraft. A high-flyer in all senses of the word and a thoughtful, established pilot and officer he was set for a glittering career in the Service, certain to rise to high command.

In early 1961, 7 Squadron equipped with Hunters was based at Palam airbase in New Delhi. They moved to Jamnagar for gunnery training at the firing ranges around that airbase. This involved firing of cannons and rockets and the dropping of bombs. The stage was set for Karan’s act of supreme self-sacrifice.

On the morning of 19th January 1961, Karan took off in his Hunter for a routine gunnery training exercise. Just after take-off, on reaching a height of some 200 feet, Karan messaged his formation leader over the radio-telephone that his engine had flamed out i.e. had lost power through the extinction of the flame in the jet’s combustion chamber. There was sufficient height for him at this stage to make a successful ejection and land safely on the ground. This was what the formation leader ordered. But at this time the aircraft was heading straight in the direction of the heavily populated area of Jamnagar city. If Karan had ejected and abandoned the aircraft it would certainly have crashed into the city and caused vast damage to life and property. The aircraft’s fuel tanks were full, added to which there was a load of ordnance on board. The explosion caused would’ve resulted in a catastrophe.

Karan, in an act born out of the ethos of the IAF and no doubt the traditions of his ancestors, chose to reject the easy way out and save his life. He stayed at the controls of his plane. His last transmission to his leader was to the effect that he was trying to steer the stricken aircraft away from the populated area. Banking sharply left he deliberately turned the Hunter towards an open piece of ground. In the process, he lost the valuable advantage of height which would’ve enabled him to eject safely. Karan then made a forced landing in a field. Unfortunately, he was killed instantaneously during the crash and the subsequent explosion of the fuel tanks. It was an act of the greatest sacrifice and heroism.

In the words of the citation for the gallantry award recommended for him, ‘By his gallant act and supreme sacrifice, Flight Lieutenant Kalsia has created a noble tradition for the India Air Force to emulate’. Truly! In giving up his life to ward off a catastrophe Flight Lieutenant Karan Sher Singh Kalsia set the highest standards of leadership and heroic self-sacrifice. He was awarded the Ashoka Chakra, Class II (later renamed the Kirti Chakra). Never was a gallantry award more richly deserved.

The Kalsia family hail from the village of the same name in the Majha region of Punjab. Sardar Gurbaksh Singh, a military commander of the Krorasinghia Misl of Sikhs founded the state in 1760. The state centred around the town of Chhachhrauli (in Yamunanagar district) with two outlying enclaves at Dera Basssi (now in Mohali district) and Charik (currently in Moga district). He and his successors were confirmed in their possessions by Maharaja Ranjit Singh and the British. Thus, their rule continued for nearly two centuries till the merger of the state with the Union of India. Raja Ravi Sher Singh who reigned from 1908 to 1947 was an enlightened modernizer and initiated many reforms in administration and improvements in people’s lives. He was an early aviator, learning flying and owning planes. Karan was his son and successor. Not only did he carry on in the footsteps of his father by becoming a pilot but kept alive the rich traditions of martial excellence and valour of his forebears.

In their no doubt well-intentioned efforts to decrease the pension bill and make up the chronic shortage of officers at the cutting edge, the powers that be at Army Headquarters are coming up with what they consider innovative ideas and fancy terminology. The latest is the Tour of Duty proposal. Patriotic, nationalistic youth will be taken into the Army for a tour of duty of three years after which they will be left to fend for themselves. This solution raises eminently more questions than it answers.

A large, standing army with huge commitments on un-demarcated, porous boundaries and in combating multiple insurgencies cannot make do with what can only be termed as amateurs. Only a professional officer corps can rise to the challenges faced by our country. The training, motivation and regimental system has produced good results in the short-service commission intake in the past. Better incentives and second career avenues need to be given to make it dynamic enough for the needs of the 21st century.

Till such time as the political executive realises that there are no short-cuts to building a proper leadership cadre for the armed forces and such leaders cannot be produced through cut-rate solutions the armed forces and their quest to ameliorate the officer shortage will continue to flounder. Paying out peanuts only buys monkeys!

India has wisely refused to get into a war of words with the Chinese over the ongoing confrontation in Eastern Ladakh centred around the Pangong Tso. Instead a quiet mobilisation of troops earmarked for the defence of the area and carrying the offensive into Chinese territory has taken place.

As far as the order of battle of Indian troops in the area namely XIV Corps is concerned there have been changes and a qualitative increase in the degree of offensive power available from earlier decades. The infantry division normally deployed in the area is now up to strength. This has not been the case for a few decades after the 1971 war saw one formation under its command being deployed to the plains and not returning.

An independent armoured brigade now provides the offensive striking punch to the Corps giving the Chinese some uncomfortable moments. This is backed up by an independent infantry formation available for reinforcement, counter-penetration or mobile offensive tasks. The longer reach of combat air power is reassuring and a potent force multiplier.

There has never been another option to deal with Chinese bullying than to stand up to them. Indian diplomatic efforts to find solutions to recurring boundary disputes must be bolstered up by the hard power of the military.

We must in addition revisit the question of raising more hard-hitting, agile, mobile formations tasked with carrying the offensive into the adversary’s territory. Nothing shakes up the Chinese leadership as much as the thought of losing territory or face in front of its increasingly restive population.

Night Curfew To Continue Beyond May 31 In Rajasthan: Chief Minister

Punjab goes after liquor mafia, over 8L litres lahan seized in less than a month