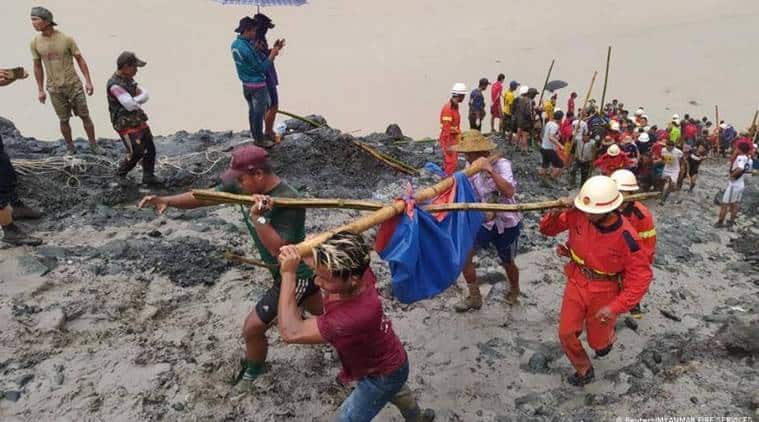 At least 160 jade miners died in a mudslide due to heavy rains in northern Myanmar in Hpakant, Kachin state on Thursday.(Deutsche Welle)

At least 160 jade miners died in a mudslide due to heavy rains in northern Myanmar in Hpakant, Kachin state on Thursday.

The Myanmar Fire Services Department involved in the rescue operation wrote on its Facebook page that the miners had been smothered by a wave of mud.

The rainy season lasts for four months in Kachin state, and landslides are very common during this time period.

“We can say at least 100 dead bodies were found by 2pm today,” Shwe Thein, regional chairman of the ruling National League for Democracy Party (NLD), told DW. “This kind of landslide happens at least 10 times a year in the Hpakant area alone. This is also happening in other areas too. Many people die.”

Hpakant-Lonkin in Kachin state is the largest and most well-known jade producing area, where many miners work under hazardous conditions. Most work without a contract as daily wage laborers and with no available healthcare. Additionally, scavengers – mostly migrants from other states – work and live at the base of the mounds of earth near the mines.

“Although there are regulations on the mining of jade in the area, no laws are enforced and there are no follow-ups. Many of the mining companies do not follow the guidelines,” said Shwe Thein.

“The longer the government waits to introduce rigorous reforms of the jade sector, the more lives will be lost. This was an entirely preventable tragedy that should serve as an urgent wake-up call for the government,” said Paul Donowitz, a campaign leader at Global Witness, an international human rights and anti-corruption organization.

The government should immediately suspend large-scale, illegal and dangerous mining in Hpakant and ensure companies that engage in these practices are no longer able to operate, Donowitz told DW.

More than 24 hours after the tragic incident, Suu Kyi offered her condolences to the grieving families and blamed the tragedy on joblessness while also mentioning the military’s involvement in the rescue operation.

Who owns jade and how is it sold?

Over 90% of the world’s jade is mined in Myanmar. The most valuable jade in the world is found in the country’s Kachin Hills. The jade industry is worth more than $30 billion (€26.7 billion), according to Global Witness. That figure amounts to more than half the country’s GDP.

The Kachin Hills, the primary jade mining region in Kachin state, are regulated by the Myanmar military, also known as the Tatmadaw. For decades, locals did not even know who owned the mines.

Myanmar joined the Extractive Industries Transparency Initiative (EITI) in 2014 – a global standard for the good governance of oil, gas and mineral resources based in Norway. The EITI requires that members disclose their revenues from extracted natural resources.

Myanmar submitted its reports with the Natural Resource Governance Institute (NRGI), observing that these disclosures have been extremely limited in scope and accuracy.

Research commissioned by the Myanmar EITI in 2016 estimated that 60-80% of gemstones produced in the country were not declared, and therefore bypassed the formal system.

“Nearly half of the jade and gemstone company data shared from these reports was missing, incomplete, or irreconcilable with government data,” the EITI stated in a report published in February.

The creation of the Beneficial Ownership Task Force, an effort to reveal the ownership of the extractive companies, has been hailed as a positive step forward. “The register signals a strong commitment by the Myanmar government to advance the agenda of ownership transparency, in line with the EITI standard,” said EITI executive director Mark Robinson.

The ownership data reveals that many jade companies are owned by military families or ex-military officials. The Tatmadaw also holds official stakes in the jade industry through Myanmar Economic Holdings Limited and the Myanmar Economic Corporation.

The Chinese connection and jade

Jade is sold within the country in large gem emporiums in the capital Naypyidaw, and organized by MGE, a state-owned company responsible for regulating the sale of jade and gemstones through joint venture agreements with private companies. At these emporiums, the jade is auctioned and whoever wins the bid has to pay for it within 90 days. However, the money never turns into government revenue.

Myanmar earned over €400 million in sales at the jade and gems emporium in March 2019. Recorded sales at the other emporium, held in September, exceed €500 million, which is far lower than gem watchdog’s estimate.

According to the Natural Resource Governance Institute (NRGI), up to two thirds of jade production is not subjected to tax. The most valuable jade is often smuggled to China through the porous border of Kachin state and exempt from any taxation. Online sales have also made 80% of purchases tax-free, according to local jade sellers.

“Commercial jade is only produced in Myanmar. Most of the buyers are Chinese people from different parts of the world because they believe in its spiritual powers,” Myanmar Gems and Jewelry Entrepreneurs Association chairman Than Win told DW. He also chairs the board of the Mahar Aung Myay jade market – the largest jade market in Myanmar.

“The Chinese buyers come here and buy the jade and the Myanmar traders go to the gem expos in China to sell it every year,” he said.

Uncut jade is often smuggled to China through the porous border and sold in Ruili, a city in Yunnan province on China’s border. The city is known by jade traders for its Yangyanghao Taobao Raw Jade Trade Market, co-organized by the Chinese government and Taobao – the country’s largest e-commerce platform. It is the only market that offers online auctions and trades in raw jade through live streams.

Jade mining is also a source of resentment among locals and a source of conflict in Kachin, where locals believe that they are not benefiting from the local resources and are living under poor conditions. There is also an ongoing rift between ethnic militias and the military and control over jade resources is a strategic priority for both sides in the conflict.

From Sri Lanka to Seychelles: Destinations that have opened its doors for tourists amid Covid-19