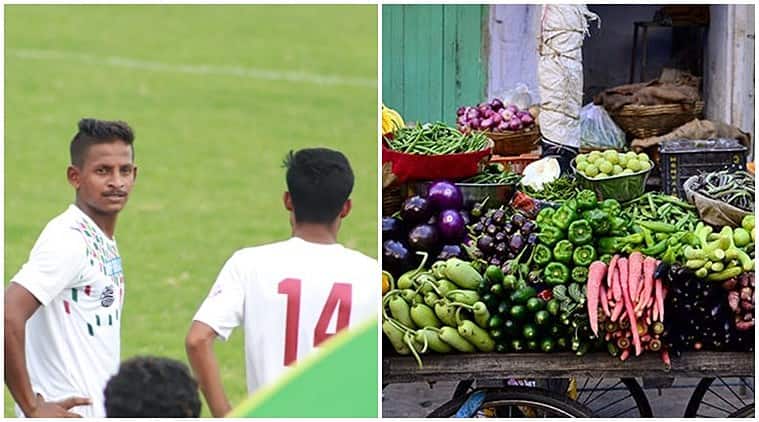 
Deep Bag had made a place in Mohun Bagan U-19 academy team last year but is now selling vegetables. (Source: Special arrangement)

A junior academy footballer at Mohun Bagan FC, Deep Bag, has kept aside his passion for playing football for the moment and has been forced to sell vegetables to make ends meet amidst the coronavirus pandemic.

A resident of Konnanagar in Hooghly district of West Bengal, 20-year-old Bag was struggling to support his family of four due to the crisis triggered by the lockdown in Bengal.

Bag, who trained at the Durgapur Mohun Bagan U-19 academy and played as a stopper till last season, used to get an allowance (1000 rupees) during his stay at the academy. His stipend, along with his 68-year-old father’s income, who is a rickshaw puller, helped the family survive.

As the pandemic set in, Bag was forced to leave the game and return home. However, his father fell sick soon after. Seeing the helplessness of his family, the youngster started selling vegetables on the footpath.

“My father fell ill during the lockdown and now he is incapable of pulling his rickshaw. So that is why I decided to take up this job, at least I can feed my family two meals a day now,” Bag told the indianexpress.com.

Incidentally, Bag was part of the Mohun Bagan team that played the controversial under-19 Football League final against East Bengal last year, which was abandoned due to crowd unrest after spectators hurled bottles. Both the teams had been adjudged joint winners.

His plight has also been on social media by a Mohun Bagan fan group, the ‘Delhi Mariners’.

“We as a group have created a fund and we have also spoken to Ranjit Bajaj. He has said that right now there is no scope of trials but he will try to get him some sort of a stipend. Once the lockdown ends he will be asked to give a trialto ensure that he stays with the game,” said Arijeet Samanta, spokesperson of Delhi Mariners.

However, not all hope is lost. After his daily work, Bag continues to practice football in the evenings.

“Once this all ends, I will once again play football professionally, hopefully in the I League, because football is my only dream,” he signed off.

Antibody immunity to Covid-19 may be short-lived: UK study

IPL 2020: How Delhi Capitals won the match in half a Super Over against Kings XI Punjab