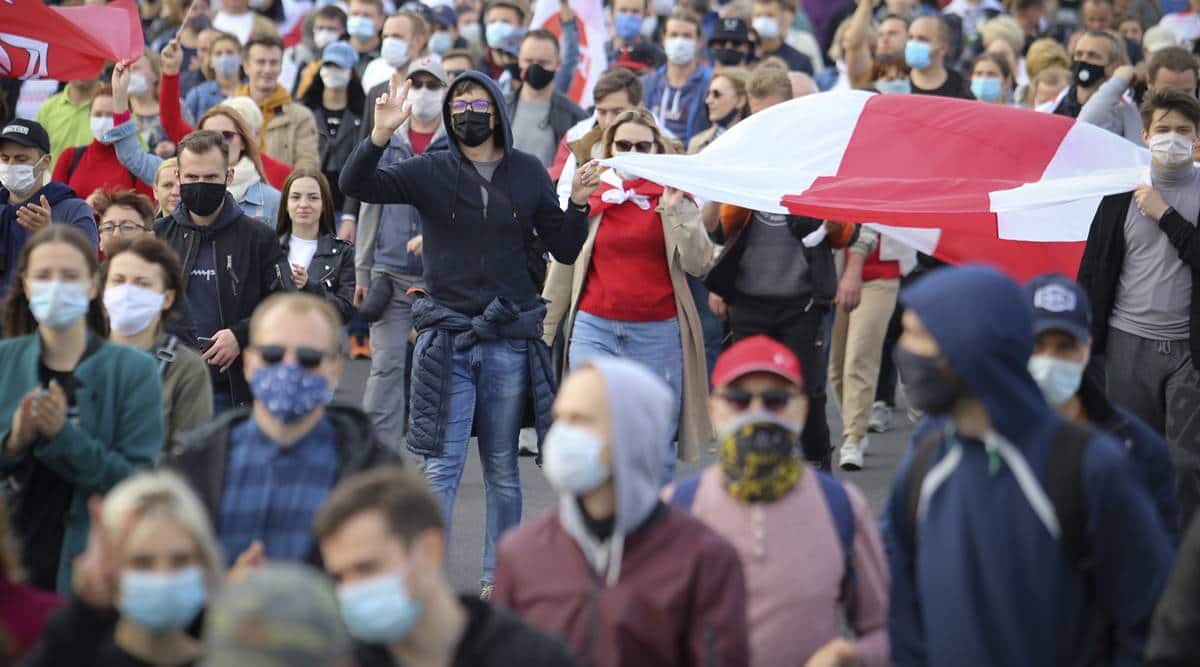 Authorities in Belarus said Monday that more than 300 people were detained during the previous day’s protests against the country’s authoritarian president, who won his sixth term in office in a vote widely seen as rigged.

The Interior Ministry said 317 people were detained during rallies in several cities Sunday against Alexander Lukashenko. In the capital, Minsk, where according to a rights group nearly 120,000 took part in a rally on Sunday, water cannons were used to disperse the crowds, the ministry said. Police estimated the turnout to be around 10,000 people.

In the city of Vitebsk police used tear gas against protesters, the ministry said. The vast majority of those detained — 258 — remain in custody pending a court appearance.

Mass protests have rocked Belarus for almost two months, with the largest held on Sundays and drawing up to 200,000 people. The unprecedented unrest was triggered by the results of the Aug. 9 presidential election that handed Lukashenko, who has run Belarus with an iron fist for 26 years, victory with 80% of the vote.

Belarusian opposition leader Svetlana Tikhanovskaya is welcomed by supporters, during a rally, by the Brandenburg Gate in Berlin, Monday, Oct. 5, 2020. (Kay Nietfeld/dpa via AP)

His main challenger, Sviatlana Tsikhanouskaya, got 10%. She and her supporters refused to recognize the results, saying the outcome of the vote was manipulated.

The government has since scaled down on the violence but has maintained the pressure, detaining hundreds of protesters and prosecuting top activists. Prominent members of the opposition’s Coordination Council, formed to push for a transition of power, have been arrested or forced to leave the country. But the protests continued despite the crackdown.

On Monday, the elderly took to the streets, protesting against Lukashenko. Several hundred older men and women marched through the center Minsk, chanting “Go away!” and “Grandmothers are against violence!” The crowd walked all the way to the Interior Ministry, where the protesters started shouting “Freedom to our grandchildren!” According to the Viasna human rights center, three people were detained.

The Belarusian opposition hopes to greatly expand the list of sanctioned officials, Tsikhanouskaya’s spokeswoman, Anna Krasulina, told The Associated Press on Monday. “Our list includes around 800 names — all those who committed violence against peaceful citizens, who gave orders to commit violence, all of them will have to answer,” Krasulina said. “Those who falsified the election made the list as well.”

According to Krasulina, the expanded list will be presented on Tuesday during Tsikhanouskaya’s meeting with German Chancellor Angela Merkel. “We see that the EU decided on the sanctions and imposed them. We expect the sanctions list to grow significantly,” Krasulina said.

She added that the opposition “counts on Germany’s help” to start a dialogue with Belarusian authorities about holding a new election.

Anti-racism protests vs Capitol Hall siege: How police responded to both protests

Experimental COVID-19 vaccine is put to its biggest test