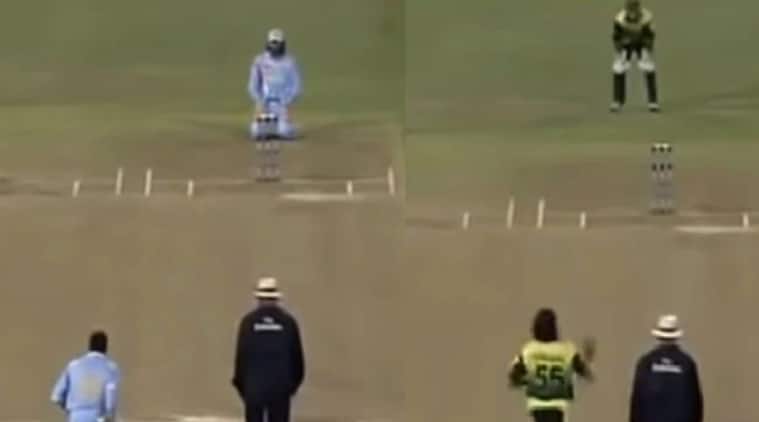 
MS Dhoni takes an unusual position directly behind the stumps to his bowlers in the bowl-out; Kamran Akmal stands in the usual wicketkeeper’s position. (Screenshot)

When the match between India and Pakistan in the 2007 T20 World Cup went into a bowl-out — the prevalent method of deciding tied T20s before the Super Over — it was a piece of street-smartness by wicketkeeper MS Dhoni that took India to victory, said Robin Uthappa.

Uthappa, one of the five bowlers delegated by India in their first ever taste of the bowl-out, said Dhoni did something that Pakistan wicketkeeper Kamran Akmal did not do, thus making it very easy for the Indian bowlers to hit the stumps.

Speaking on a Rajasthan Royals podcast with New Zealand spinner Ish Sodhi, Uthappa said, “One of the things that MS Dhoni did really well that night, and that he did different from what the Pakistan keeper did, was where he stood behind the stumps.”

“The Pakistan keeper (Kamran Akmal) was standing where a keeper usually stands. A few feet back and besides the stump — just alongside the stump. But MS was (sitting) right behind the stumps and that made it so much easier for us. We just had to bowl at MS and it gave us the best chance to hit the wickets. That’s all we did.”

Pakistan, who picked most of their regular bowlers for the bowl-out, did not have much luck, with the first three – Yasir Arafat, Umar Gul and Shahid Afridi – all missing the stumps. India went for Virender Sehwag, Harbhajan Singh and Uthappa, all of whom struck the stumps.

“Venkatesh Prasad (India’s bowling coach) was the studious type in our team back then. He was very astute and he had us preparing for this scenario. In the warm ups, we had the bowlers pitted against the batsmen and we won the bowl-outs every time,” Uthappa recalled, on how he came to bowl one of the deliveries, adding that he could see Pakistan bowlers were barely prepared for that scenario.

READ | ‘I’m your captain, don’t try to fool me’: When an angry Dhoni scolded Shami

The 2007 India vs Pakistan match was one of the few international matches to be decided by the bowl-out, before the concept of the Super Over was introduced in 2008. This remains India’s only match that went into a bowl-out.

Uthappa, who top-scored for India in that match with 50, said that his innings in Durban was his personal favourite knock of all time.

When Ajit Agarkar turned Lion at Lord’s in 2002

Naomi Osaka to skip Wimbledon but compete at Tokyo Olympics

Soccer in the hood: Players from the National team train during pandemic

‘Kingpin’ of fixing racket in Australia is Indian on BCCI radar

IPL 2021: More frequent testing, no outside food allowed as bio-bubble gets stricter