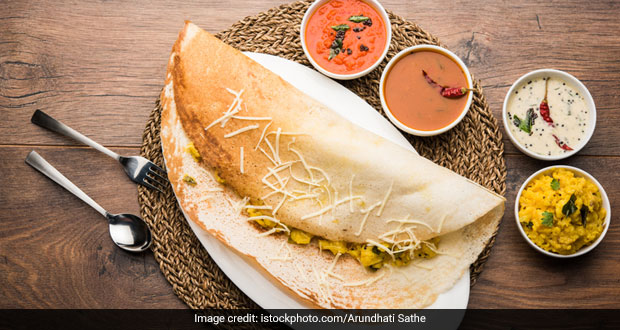 Dosa has been one of the crown jewels of South Indian cuisine since time immemorial. According to food historian and author KT Achaya, references of dosa or dosai have been found in Sangam literature of first century AD, and ever since then we have seen the crispy and delicate Indian crepe evolve in so many ways that it is often hard to keep a count. We hear about fusion dishes like cheese dosa and chocolate dosa and wonder if there is anything that you cannot  sneak inside a dosa and have an absolute winner at hand! One of our all-time favourite kinds of dosa is the Mysore Masala dosa. In terms of look and feel, it appear much like the masala dosa, however if you look closely, you can find that the filing or the masala inside is slightly different. Along with mashed potato masala, you would find some sliced onions, hot masalas and green chillies. The dosa is slathered over with a dash of red garlic chutney before the filling goes in, and finished off with a hint of butter. Even the outer texture of the dosa is crispy and brown and not paper-thin and crunchy, the inside is somewhat spongy.

There are innumerable legends associated with the Mysore Masala Dosa. Mysore is renowned for a range of its exquisite delicacies like Mysore bonda and Mysore Pak. According to one of the local legends, the Maharaja of Mysore threw a lavish feast that resulted in copious amounts of left-overs. The kings ordered his chefs to think of a way that would reduce food wastage, and thus they came up with the ingenious idea of stuffing dosas with potatoes, lentils, ghee and spices. However, many believe that the original Mysore Masala dosa was invented in a modest eatery called Mylari, in the city of Mysore. This is the reason why the Mysore Masala dosa is also referred to as the Mylari dosa by many. The shop exists even today, and is quite a rage among foodies for its inimitable signature dish.

(Also Read: Mysore’s Mylari Dosa is Not What You’d Expect)

Today, there are many versions of Mysore Masala dosa, it has become a sensation across India now. It is hard to find a South Indian restaurant/ take-out joint that does not have this fiery marvel up its menu.

We have a scrumptious recipe too. Try making this Mysore Masala Dosa recipe at home and let us know how you liked it

About Sushmita SenguptaSharing a strong penchant for food, Sushmita loves all things good, cheesy and greasy. Her other favourite pastime activities other than discussing food includes, reading, watching movies and binge-watching TV shows.

Alkaline Water: How It Is The Key to Boost Your Immunity

5 Quick And Easy Bread And Milk Recipes For Breakfast

Plum-Tamarind Sherbet: An Ultimate Drink To Refresh You This Summer