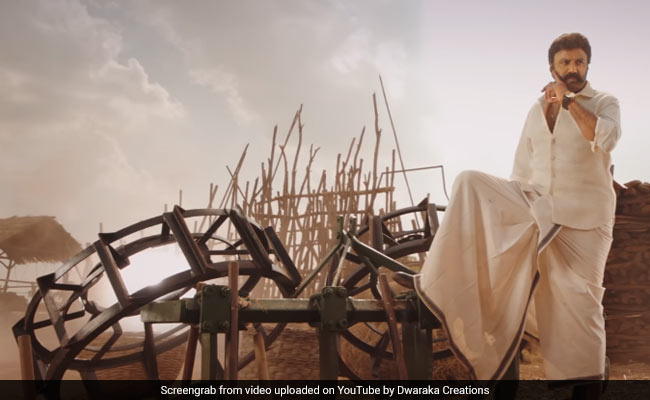 Nandamuri Balakrishna in a still from NBK 106. (Image courtesy: YouTube )

A day before Nandamuri Balakrishna’s 60th birthday, the makers of his upcoming Telugu project, titled NBK 106, unveiled the “first roar” from the film. The actor occupied the top spot on the list on trends on Tuesday after the teaser of NBK106 released on social media. The over 1-minute long clip features the south star making a blockbuster entry wearing a white shirt and lungi. It is followed by some intense and action sequences, in which Nandamuri Balakrishna can be seen fighting his enemies in style. The makers of NBK 106 shared the first look teaser on social media and wrote: “#BB3 First roar from NBK 106 on Dwaraka Creations. #NBK106 is a latest Telugu movie directed by Boyapati Srinu.”

Earlier in the day, trade analyst Taran Adarsh made an announcement about the first-look teaser of NBK 106 on Twitter. He wrote: “As Nandamuri Balakrishna turns 60 tomorrow, the makers of his ongoing Telugu film will unveil the ‘first roar’ today at 7.09 pm…#Balakrishna and director #BoyapatiSreenu reunite for the third time, hence the collaboration is called #BB3 #BB3Roar #NBK106 #NBK60 #BalayyaBoyapati3.”

As #NandamuriBalakrishna turns 60 tomorrow, the makers of his ongoing #Telugu film will unveil the ‘first roar’ today at 7.09 pm… #Balakrishna and director #BoyapatiSreenu reunite for third time, hence the collaboration is called #BB3. #BB3Roar#NBK106#NBK60#BalayyaBoyapati3pic.twitter.com/3oyhGMaM1z

Monsoon Session Of Parliament May Be "Hybrid", Virtual Due To COVID-19 Pandemic: Report

Iran to execute man who allegedly spied on US-slain General

Breathe: Into The Shadows – Aishwarya Rai Bachchan’s Reaction To Trailer Of Abhishek’s Show