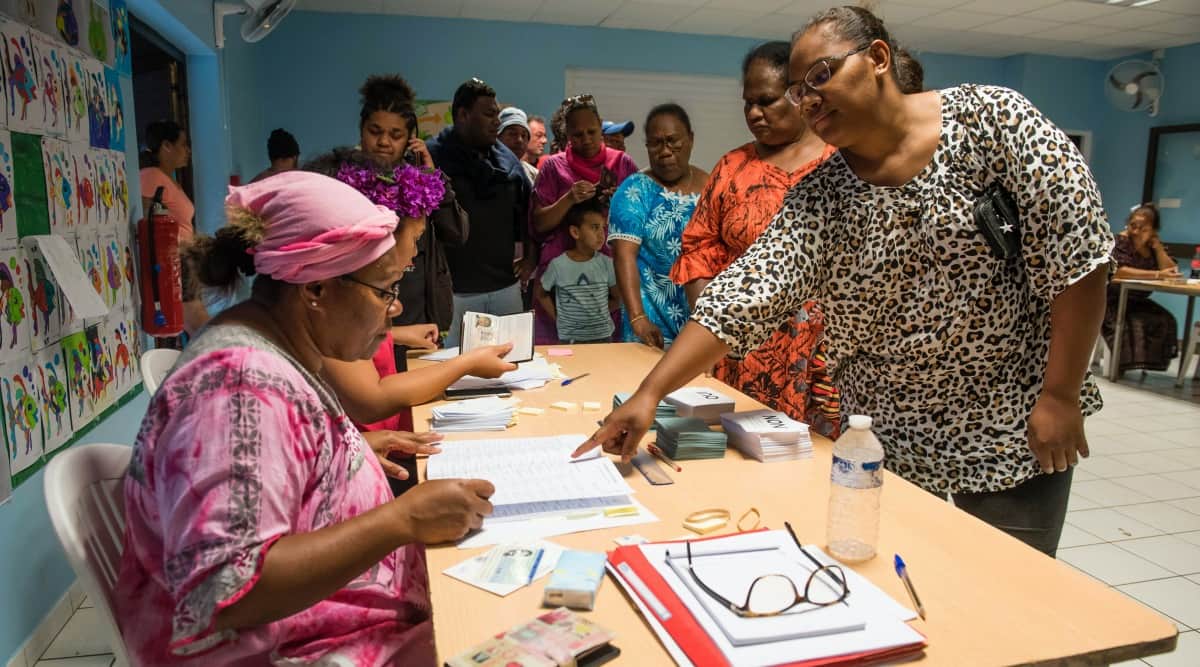 
A woman points to a voting notebook before voting in Noumea, New Caledonia, Sunday, Oct.4, 2020. Voters in New Caledonia, a French archipelago in the South Pacific, were deciding Sunday whether they want independence from France in a referendum that marks a milestone in a three-decade decolonization effort. If voters choose independence, a transition period will immediately open so that the archipelago can get ready for its future status. Otherwise, New Caledonia will remain a French territory. (AP Photo/Mathurin Derel)

Voters in New Caledonia turned out in large numbers on Sunday to decide whether the archipelago in the South Pacific should get independence from France and break ties that were first established in the mid-19th century.

Sunday’s independence referendum is part of a three-decade decolonization effort aimed at settling tensions on the archipelago between native Kanaks seeking independence and residents willing to remain in France.

More than 180,000 voters were invited to answer the question: “Do you want New Caledonia to gain full sovereignty and become independent?” “Today is not a day like any other. Everyone woke up with the will to express oneself (through the vote). This is a historic day,” Robert Wayaridri, 60, told The Associated Press.

In Noumea, the capital, large lines of people waited to vote under the hot sun, sometimes for hours. Almost 80% of voters had already casted their ballots one hour before poll stations closed, according to the French ministry of the Overseas.

Across the archipelago, horns and cheers could be heard all day in the streets, and some people waved pro-independence flags in a relaxed atmosphere.

The FLNKS movement leading the independence campaign called on its supporters to stay “calm and respectful.” Polling stations closed at 6 pm (9 am in mainland France). Results are expected later Sunday.

If voters choose independence, a transition period will immediately begin so that the archipelago can get ready for its future status. Otherwise, New Caledonia will remain a French territory.

Corine Florentin, who was born in Noumea 52 years ago, said she voted against independence because she wants to “remain French”. “We can live together, all races together, and design our common future,” she said.

A student at the University of New Caledonia, Guillaume Paul, 18, also voted “no” because he wants the archipelago to keep its ties with France.

“What would the country become if it was independent? There is a real danger that without the financing brought by France, the university would disappear,” he said.

But Joachim Neimbo, 22, was in favour of independence.

“I voted yes, because that’s my people’s combat. We want the recognition of our identity, our culture. I think we are able to manage ourselves,” he said.

“We need to return to tradition, to working in the fields, to stay with the tribe. Modern life is too complicated for us,” he said.

Two years ago, 56.4% of voters who participated in a similar referendum chose to keep the region’s ties with Paris.

Both referendums are the final steps of a process that started 30 years ago after years of violence that pitched pro-independence Kanak activists against those willing to remain in France.

The archipelago now counts 270,000 inhabitants, including both native Kanaks, who once suffered from strict segregation policies and widespread discrimination, and descendants of European colonisers.

New Caledonia became French in 1853 under Emperor Napoleon III “Napoleon’s nephew and heir” and was used for decades as a prison colony. It became an overseas territory after World War II, with French citizenship granted to all Kanaks in 1957.

‘Why do we deserve to die?’ Kabul’s Hazaras bury their daughters

China’s women filmmakers are embracing their stories, moviegoers are loving it