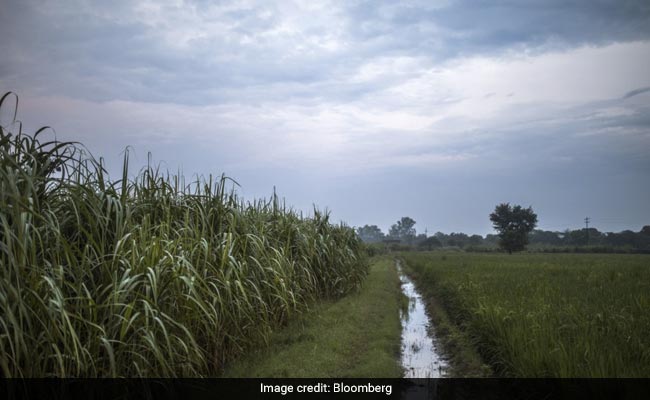 The weather office maintained on Monday its April forecast of a normal monsoon.

The forecast of a normal monsoon and its timely onset may cheer farmers and policy makers alike in India, with prospects of a bumper crop output seen lessening the severe impact of the coronavirus on the economy.

The weather office maintained on Monday its April forecast of a normal monsoon and announced that the weather phenomenon, which waters more than half of India’s farmland, reached the southern state of Kerala on June 1, in line with the usual timing of the annual event.

The monsoon, which shapes the lives of millions and influences food prices, is critical for agriculture as it irrigates fields directly and fills reservoirs that help winter-sown crops. It assumes greater significance this year as millions have lost their livelihoods because of stringent stay-at-home rules imposed to stem the coronavirus. India is heading for its first full-year GDP drop in more than four decades, and the rural economy accounts for about 45% of GDP. 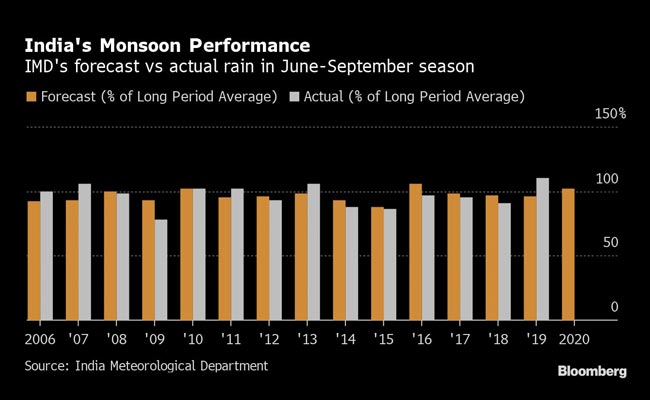 “A normal monsoon is a good mitigating factor for the tremendous headwinds India faces, but it will not necessarily alter the course of the Indian economy,” said Rahul Bajoria, senior economist with Barclays Bank Plc. “A good monsoon should have a calming effect on food prices. We are not worried about inflation per se.”

Rains during the June-September rainy season will be 102% of the long-term average of 88 centimeters, Madhavan Nair Rajeevan, secretary of the Ministry of Earth Sciences, said via a video conference on Monday. The forecast has a margin of error of 4% and compares with the April prediction of 100% of 50-year average rainfall. The timely onset will spur sowing of crops such as rice, cotton and corn.

“If you go by the prediction it means good crops,” said Prerana Desai, head of research at Edelweiss Agri Value Chain Ltd., adding that it will boost the surplus of most commodities and help curb prices.

About 60% to 90% of annual rainfall occurs during the monsoon period over different states, except the southern state of Tamil Nadu, which gets only about 35% of its rainfall from the rainy season. Farmers generally wait for the monsoon to arrive before planting crops such as rice, corn, pulses, cotton and sugarcane. Any deficit in showers during the early part of the season could delay sowing and hit yields, even if rains gather pace later.

The probability of a normal monsoon this year is 41%, the India Meteorological Department said. The chance of below-normal showers is 15%, while there is a 5% possibility of deficient rains, said Mrutyunjay Mohapatra, director general of the weather department.

The forecast indicates there’s a probability that weak La Nina conditions will develop over the Pacific Ocean in the second half of the rainy season. Conditions for an Indian Ocean Dipole, which is similar to El Nino, are neutral at the moment and that’s likely to continue during the four-month monsoon season.

The prevailing and predicted sea surface temperatures over the Pacific and Indian Oceans are favorable for a normal rainy season, the weather office said.

According to a dynamic weather model, which is experimental at present, rain during the monsoon season will likely be above-normal at 107% of the long term average. The forecast has a margin of error of 4%, it said. Last year’s monsoon rainfall was 10% more than normal, the highest since 1994. That helped boost crops, with India’s food grain output estimated to have reached a record in 2019-20.

–With assistance from Shruti Srivastava and James Poole.

NASCAR is back and fans may be right behind

What States Said About Quarantine, As Domestic Flights Resume: 10 Points