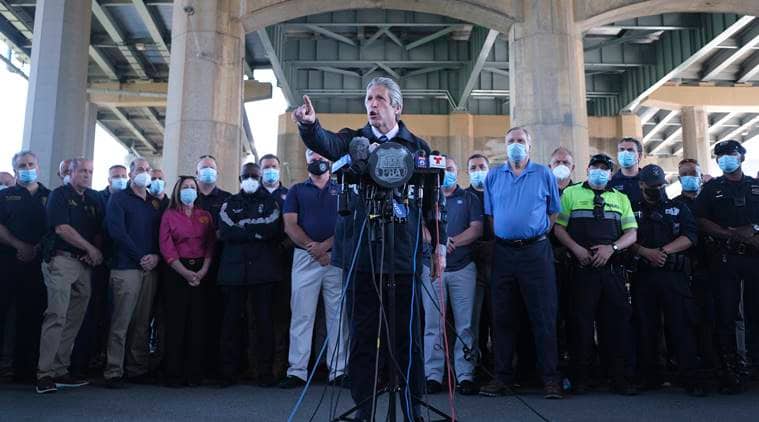 
Surrounded by law enforcement and supporters, New York City PBA President Pat Lynch, center, speaks during a news conference in New York, Tuesday, June 9, 2020.  Lynch said the mayor and police leaders were “sacrificing cops to save their own skin” by sending officers out to protests with “no support and no clear plan.” (AP Photo)

A New York City police officer who was caught on video violently shoving a woman to the ground during a recent protest over the death of George Floyd is facing criminal charges, Brooklyn prosecutors announced Tuesday.

Officer Vincent D’Andraia was charged with assault, criminal mischief, harassment and menacing in the May 29 altercation that sent protester Dounya Zayer to the hospital, causing what she said was a concussion and a seizure after hitting her head on the pavement.

D’Andraia is expected to be arraigned Tuesday, according to District Attorney Eric Gonzalez, who said he was “deeply troubled by this unnecessary assault.”

A message seeking comment was left with D’Andraia’s union. It was not immediately known whether he had a lawyer. The police department suspended the 28-year-old officer last week without pay. He had been assigned to Brooklyn’s 73rd Precinct.

Footage of D’Andraia manhandling the woman was viewed millions of times on Twitter and generated outrage among protesters and elected officials.

The altercation underscored the same concerns about police misconduct that prompted demonstrations around the country following the Floyd’s May 25 death at the hands of Minneapolis police.

Democratic US Rep. Hakeem Jeffries called for D’Andraia’s firing and praised the reassignment of his commanding officer, who witnessed the shoving and did not intervene.

“Violent police officers who brutalize civilians must be held accountable for their behaviour,” Jeffries said in a statement. “It’s my hope this is the beginning of transformational change in the largest police department in the nation.”

Zayer, 20, said D’Andraia was a coward and suggested the assault would only deepen mistrust of law enforcement.

“I was protesting for a reason,” Zayer said in a video tweeted from her hospital bed. The officer, she added, “should have had the self restraint to not hurt the people he’s supposed to be protecting.”

The NYPD’s treatment of peaceful protesters has come under fire in recent weeks amid daily demonstrations spurred by Floyd’s death and police brutality against people of colour.

The shoving in Brooklyn happened a day before a separate clash between police and protesters in which another NYPD officer was seen pulling a demonstrator’s mask down and spraying pepper spray. That officer was also suspended.

Mayor Bill de Blasio has promised all allegations of police misconduct would be investigated. But he also has played down accounts of police violence amid the unrest, telling reporters he personally had seen “no use of force around peaceful protests.” He credited officers for using “lots of restraint.”

Watch: AOC unleashes a viral condemnation of sexism in Congress