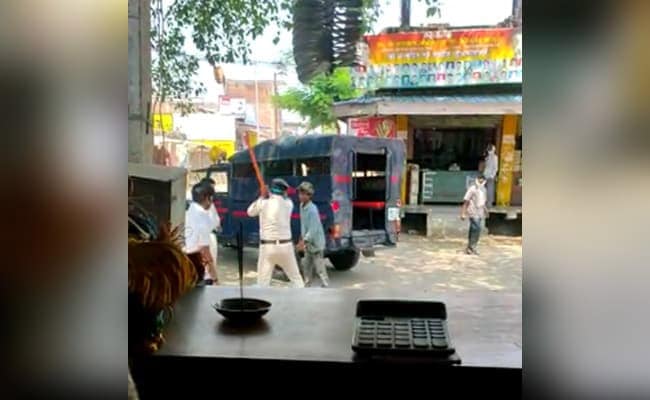 Two policemen are seen raining blows on a man, apparently intoxicated, with their batons in a video that has been widely shared on social media, triggering huge criticism. The video from Madhya Pradesh’s Chhindwara, about 300 km from state capital Bhopal, has now prompted a probe by the city police.

The clip apparently shot on a mobile phone shows one of the two cops beating the man till he falls on the ground. He is then joined by his colleague, standing next to him. Another man in a white shirt and black trousers is watching them both. He then helps the policemen as they carry the man to the police van and then drive away.

This clip – nearly 1 minute and 32 seconds long – is an old one, said police, adding that the man who was being beaten was creating ruckus in the neighbourhood.

“An old video has gone viral that shows a man being beaten. We have taken note of it. Two cops – Krishna Dongre and Ashish – are seen in the clip. The man was seen creating ruckus. We have ordered a probe. Police dropped the man. No case has been filed against him. We will wait for the probe to complete,” senior police officer Shashank Garg told reporters.

Many on social media had sought to know the reason of the provocation, calling the incident “brutal”.

“What makes them so cruel?” wrote a user.

Another user tweeted: “How brutally these cops are thrashing this man, these police officers must be jailed immediately.”

The video comes as a nationwide lockdown continue to tackle coronavirus, which has infected over 6,000 people in Madhya Pradesh, killed over 270 patients.