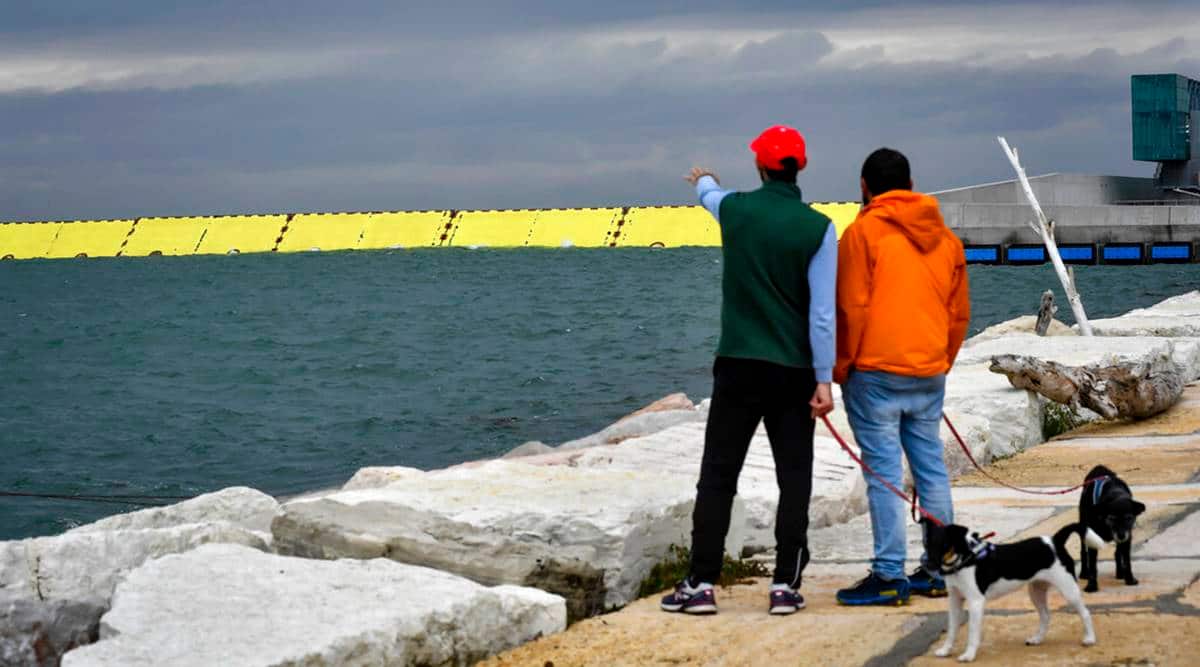 
People look at yellow barriers being raised during high water in Venice, northern Italy, Saturday, Oct. 3, 2020. Controversial and long-delayed underwater barriers passed their first emergency with flying colors on Saturday, protecting the Italian lagoon city of Venice from a tide that peaked at 130 centimeters (51-inches), a level that would normally inundate about half of the city. (Claudio Furlan/LaPresse via AP)

Flooding from record rains in the mountainous region that spans France and Italy killed an Italian firefighter and left at least 25 people missing Saturday.

A storm that moved overnight across southeastern France and then northern Italy caused major flooding on both sides of the border, destroying bridges, blocking roads and isolating communities.

In Italy, a firefighter was killed during a rescue operation in the mountainous northern region of Val d’Aosta.

Authorities were searching for 17 people missing in the neighboring Piedmont region, mostly people who were traveling in cars in the Col de Tende high mountain pass between France and Italy, according to civil protection authorities.

They include two people from Germany driving with their 11-year-old and 6-year-old grandchildren, and a pair of brothers returning from France.

One man was reported to have been swept away by a swollen river after exiting his car in the province of Vercelli.

Unrelenting rainfall overnight hit levels not seen since 1958 in northern Italy’s Piedmont region, where with as much as 630 millimeters (24.8 inches) of rain fell in a 24 hour period, according to the Italian civil protection agency.

Two brothers were swept away by flood waters while they were tending animals near the French border. One brother managed to grab onto a tree and was saved, while authorities were searching on the French side for the other brother.

Eleven campers were saved in Vercelli province, where floodwaters hit 20-year highs. And Alpine rescue squads have evacuated by foot seven people who were in houses cut off by flooding at Terme di Valdieri; some had to be carried on stretchers due to the muddy conditions and accumulation of detritus.

On the other side of the border, in southeastern France, almost a year’s average rainfall fell in less than 12 hours in the mountainous area surrounding the city of Nice.

Local firefighters said at least eight people were missing, including two firefighters whose vehicle was carried away by water when the road collapsed during a rescue operation.

Nice mayor Christian Estrosi expressed his “emotion and sympathy” for the families. He said over 100 homes have been destroyed or severely damaged.

French President Emmanuel Macron on Saturday expressed gratitude toward rescuers on Twitter. “Together we will get through this,” he said.

France’s national weather agency, Meteo France, said that up to 500 millimeters of rain (19.7 inches) were recorded in some areas, the equivalent of almost one year of average rainfall.

Meteo France had issued a danger alert on Friday and all schools in the region had been closed. Local authorities urged people to stay at home.

China’s Xi Jinping warns Beijing will not be ‘bullied’

For Kamala Harris, an influential voice and a decisive vote

Efforts ramping up to get intra-Afghan peace talks started