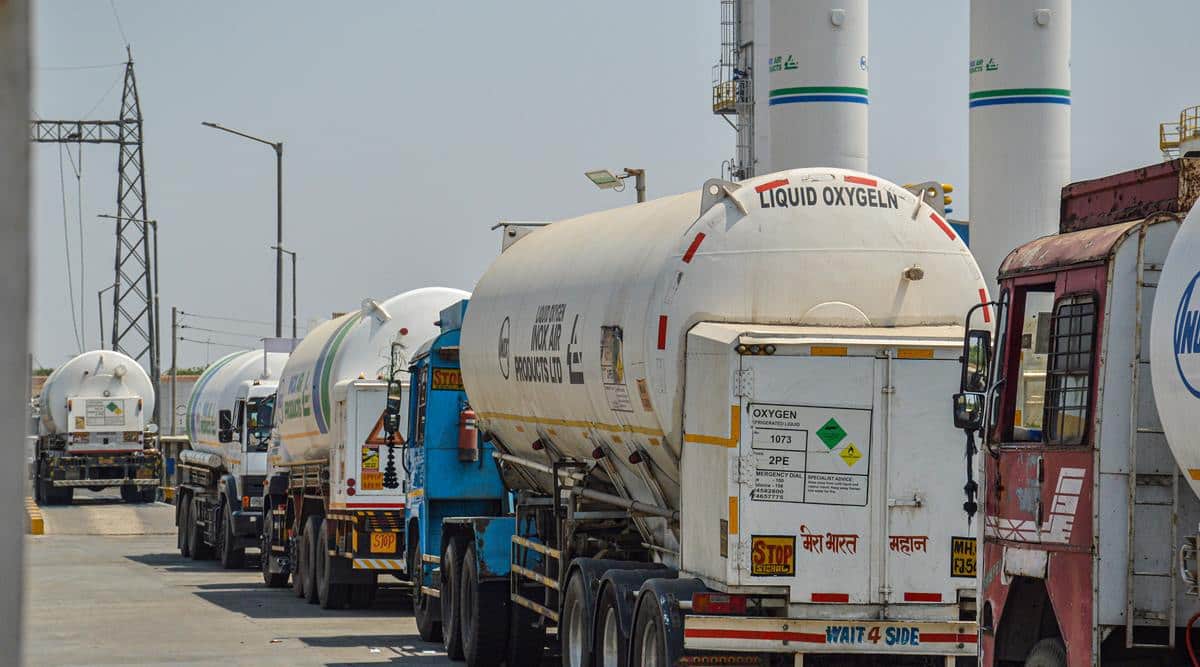 With reports of states hoarding on oxygen or stalling its supply to other states coming from across the country, the Centre Thursday issued orders under the Disaster Management Act that no state can hold up supplies of oxygen to another state.

Passing a series of instructions, the order issued by Union Home Secretary Ajay Bhalla said: “no restriction shall be imposed on the movement of medical oxygen between the States and transport authorities shall be instructed to accordingly allow free inter-state movement of oxygen carrying vehicles.”

It also made it clear that no restrictions could be imposed on “oxygen manufacturers and suppliers to limit the oxygen supplies only to the hospitals of the State/ UT in which they are located”.

“There shall be free movement of oxygen carrying vehicles into the cities, without any restriction of timings, while also enabling inter-city supply without any restriction. No authority shall attach the oxygen carrying vehicles passing through the district or areas for making supplies specific to any particular district(s) or area. …States/UTs shall strictly abide by the supply plan of medical oxygen prepared by EG II (Empowered Group II) and as revised from time-to-time,” the order said;

It put the onus of implementing the order on district magistrates and senior superintendents of police and SPs saying they would be “personally liable” for its implementation.

Large number of patients in ambulances wait to be admitted into the LNJP hospital, New Delhi (Express Photo by Tashi Tobgyal)

Sources said while similar directions had been issued by the MHA through a letter to all chief secretaries on April 18, it was more advisory in nature. “This one is an order under the Disaster Management Act and failure to implement the order can attract penal provisions of the law for concerned state officials,” an MHA official said.

The development comes at a time when reports from across the country suggest that many states are not allowing oxygen trucks to leave their states in the fear that it may lead to a shortage for their own hospitals. Many states have allegedly diverted oxygen meant for other states to their own hospitals, sources said.

In the past two days, Delhi has accused UP and Haryana of stalling its supply of oxygen, while Haryana has accused the Delhi government of “looting” its oxygen tanker meant for a hospital in Faridabad.

A COVID-19 patient wearing oxygen mask waits inside an auto ricksha to be attended and admitted to a dedicated COVID-19 government hospital in Ahmedabad, India, Saturday, April 17, 2021.  (AP Photo/Ajit Solanki)

In its order, MHA has made it clear that states have to follow the supply plan made by the EG-II for the supply of oxygen to each state according to its requirement. It has said the plan has been made in consultation with the state governments and is revised from time to time based on requirements. It has also reiterated that industrial oxygen has already been diverted for medical purposes to meet the demand.

“…due to rapid rise in COVID-19 cases and with increasing case positivity rate, various States/UTs have imposed some additional restrictions on certain activities and weekend lockdowns/curfews etc… the availability of adequate and uninterrupted supply of Medical Oxygen is an important pre-requisite for managing moderate and severe cases of COVID-19 and with the increasing cases, the medical oxygen supply will need to keep pace with the requirements of the States/ UTs,” the order has said reiterating that MHA has already issued orders that interstate movement of goods and people cannot be restricted in any situation.

“…medical oxygen is an essential public health commodity and any impediment in the supplies of Medical Oxygen in the country may critically impact the management of patients suffering from COVID-19 disease in other parts of the country,” the order has said.

Railways to conduct tests from Dec 15 to fill 1.4 lakh posts