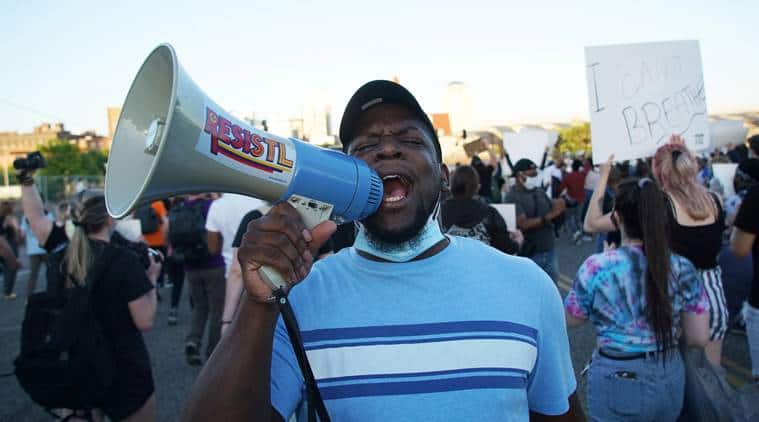 
George Floyd death: A man shouting during a protest against the death in Minneapolis police custody of African-American man George Floyd, in St Louis, Missouri, U.S. May 29, 2020. (Reuters)

Following the killing of George Floyd, thousands of protesters stopped traffic, set ablaze cars and lashed out violently at police in some places as protests spread across the US, reported the Associated Press.

Derek Chauvin, the white Minneapolis police officer, was arrested and charged with third-degree murder and second-degree manslaughter Friday, and authorities imposed an overnight curfew to stem three nights of often-violent protests that left dozens of stores burned and looted.

The incident once again brought to the fore concerns over the law enforcement’s bias against the African American minority, with Floyd’s death being cited as the most recent incident of racially-driven police brutality.

Chauvin was also accused of ignoring another officer at the scene who had expressed concerns about Floyd as he lay handcuffed on the ground, pleading that he could not breathe. George Floyd was arrested on suspicion of using a counterfeit bill at a grocery store.

Minneapolis Mayor Jacob Frey declared a curfew from 8 pm on Friday to 6 am on Saturday. However, protesters defied the curfew in Minneapolis by rallying in the city’s downtown for the fourth day.

A restaurant named Gandhi Mahal in Minneapolis was damaged after it caught fire. The hotel owner was heard saying, “Let my building burn, Justice needs to be served, put those officers in jail,” over phone. “Don’t worry about us, we will rebuild and recover. Gandhi Mahal may have felt the flames last night but our fiery drive to help protect and stand with our community will never die. Peace be with everyone,” read a Facebook post by the restaurant.

George Floyd Death: Protesters run away from police officers during a protest following the death of African-American George Floyd in the Brooklyn borough of New York City, U.S., May 29, 2020. (Reuters)

Georgia governor Brian P Kempt declared a state of emergency in Fulton county and ordered the deployment of 500 National Guard troops in Minneapolis and surrounding cities as protests turned violent in Atlanta.

In downtown Atlanta, hours of peaceful protests turned violent when some demonstrators smashed police cars, setting one on fire, spray-painted the logo at CNN headquarters and broke into a restaurant. At least three officers were hurt and there were multiple arrests. Even though Mayor Keisha Lance Bottoms appealed for calm, violence continued and more cars were set on fire, a Starbucks was smashed up and the Omni Hotel was vandalised.

US media reported that the White House went into a brief lockdown after hundreds of people rallied at a park across the street from the president’s mansion.

People watch a fire Friday, May 29, 2020, in Minneapolis. Protests continued following the death of George Floyd who died after being restrained by Minneapolis police officers on Memorial Day. (AP Photo/Julio Cortez)

Denver Mayor Michael Hancock called for calm and unity after the first of several planned protests in the city turned violent. He blamed what he called a minority of agitators among peaceful protesters for inciting violence throughout downtown on Thursday, in which rocks were thrown at police officers, windows were broken and cars were damaged at the state Capitol and at businesses.

In Louisville, Kentucky, demonstrators broke into the city’s Hall of Justice and started a fire inside.

Protesters in Phoenix, Denver, Las Vegas and Los Angeles carried signs reading, I can’t breathe. Justice for George” and chanted “No justice, no peace”, and “Say his name. George Floyd.”

Protestors demonstrate outside of a burning Minneapolis 3rd Police Precinct, Thursday, May 28, 2020, in Minneapolis. Protests over the death of George Floyd, a black man who died in police custody Monday, broke out in Minneapolis for a third straight night. (AP Photo/John Minchillo)

Crowds of demonstrators chanted at police officer outside the Barclays Centre in Brooklyn, New York. The crowd threw water bottles towards the officers, who sprayed an eye-irritating chemical twice, in return.

Several people rallied in front of City Hall in Houston, where Floyd grew up. A woman who used a rifle to incite the crowd was taken into police custody.

President Donald Trump, meanwhile, threatened action and tweeted, “When the looting starts, the shooting starts,” which prompted a warning from Twitter for “glorifying violence”.

Within hours, Twitter flagged the post for “glorifying violence” but let it remain visible in the public’s interest “to remain accessible.”

FILE – In this March 12, 2020, file photo Democratic presidential candidate former Vice President Joe Biden arrives to speak about the coronavirus in Wilmington, Del. Biden says he would like to be a “transition” from President Donald Trump to younger, rising Democratic stars. (AP Photo/Matt Rourke, File)

Joe Biden lamented the “open wound” of the nation’s systemic racism on Friday as he responded to the police killing of a black man in Minnesota. He drew an implicit contrast with President Donald Trump, who has suggested authorities could respond with violence to the protests that followed George Floyd’s death.

“The original sin of this country still stains our nation today”, Biden, the presumptive Democratic presidential nominee, said in remarks broadcast from his home in Wilmington, Delaware. “It’s time for us to take a hard look at uncomfortable truths.”

Biden announced his bid for the presidency last year arguing he’s uniquely positioned to unite a deeply divided country. He pointed to Trump’s response to a white supremacist rally in Charlottesville, Virginia, as unworthy of America’s people and values.

The Minnesota State Patrol on Friday arrested a CNN television crew as they reported on violent protests in Minneapolis following the death of George Floyd, a handcuffed black man who pleaded for air as a white police officer kneeled on his neck.

While live on air, Jimenez was handcuffed and led away. A producer and a photojournalist for CNN were also led away in handcuffs.

CNN’s communications team earlier said on Twitter that the crew was arrested for doing their jobs, despite identifying themselves a clear violation of their First Amendment rights.

The Minnesota State Patrol did not immediately respond to an email and a phone call Friday morning from The Associated Press seeking more information on the arrests.

First fires, now heat: Millions of Californians back in the dark

China has a new richest person, with Jack Ma dethroned