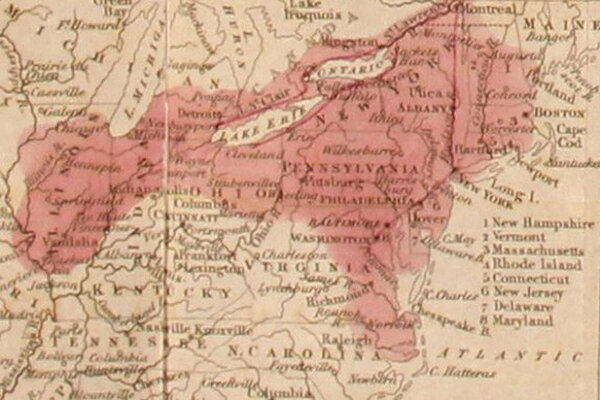 By now, most Americans have heard the cautionary tale of Philadelphia’s decision to hold a huge patriotic parade with nearly 100,000 spectators in the fall of 1918, a super-spreader event blamed for the city’s overwhelming outbreak of flu in the following days. Within 72 hours of the parade, all hospital beds in the city were full. Within six weeks, more than 12,000 people died, amounting to a death every five minutes.

During the current pandemic, Philadelphia’s 1918 response has become the poster child of how not to handle an outbreak. But the “Spanish flu” certainly wasn’t the first infectious disease the city had ever faced, and historian Timothy Kent Holliday makes the case that Philadelphia was well equipped for outbreaks decades and even centuries earlier.

Holliday earned his Ph.D this spring with his dissertation entitled “Morbid Sensations: Intimacy, Coercion, and Epidemic Disease in Philadelphia, 1793-1854.” His research looks at epidemics in Philadelphia and the role of what he calls intimate care in managing those diseases in institutions, hospitals, prisons, and quarantine stations like the Lazaretto.

Penn Today spoke with Holliday about why he thinks Philadelphia was better prepared for cholera in 1832 than it was nearly a century later when the flu landed at the Navy Yard, and what lessons citizens and governments can take from comparing the two outbreaks.

Why is the 1918 flu epidemic referenced so much during the current COVID-19 outbreak?

The best parallel to what’s happening now is always going to be the 1918 pandemic just because it’s a centennial sort of thing, it’s viral, and it’s airborne.

But the 1832 cholera outbreak is also something that you can draw parallels with to COVID because it’s a disease wending its way across the world and people are really frightened by it. The world is tracing its movement, and it is interpreted as a new disease, as was cholera in the mid-1800s.

The place where the cholera outbreak becomes a good foil for the 1918 pandemic is that Philadelphia was really well prepared for cholera. They had hospital care in place to address the excess mortality and excess illness that cholera would bring. There wasn’t the same kind of strain on public health as there was in 1918.

Why was Philadelphia more prepared for cholera than the flu?

For one, cholera spread over the course of years, so cities could brace themselves a little further in advance.

Secondly, and this is kind of a happy accident, Philadelphia had a really good municipal water supply. And they didn’t know it at the time, but cholera was transmitted through water.

What did the city do to gear up for a possible cholera outbreak?

As cholera was spreading throughout Europe, the city government and the board of health established a number of cholera hospitals, sort of temporary locations where cholera of patients could be treated. These are like schoolhouses, carpenter shops, not newly erected buildings. They were places chosen for their airiness that were easily ventilated. Basically, they were whatever buildings fit that criteria they could get their hands on because a lot of places didn’t want to volunteer to house cholera patients out of fear. People didn’t want to be living next to places that were going to be designated as cholera hospitals.

They established about 20 of these temporary hospitals. A lot of them housed just a few patients over the course of the epidemic. Some of them stayed empty the whole time.

So, Philadelphia was really well prepared in terms of having an infrastructure in place to house cholera patients and to take care of them. They also appointed cholera physicians who would be tasked with managing the hospitals and the Sisters of Charity were really important as care providers during this time, too. So, you had religious nurses, you had lay nurses, you had attending physicians, and you had the presiding physicians in these hospitals. They were really very well staffed.

They could be chaotic places, some of the more crowded ones. But I think the point of all this is that Philadelphia prepared itself for the arrival of cholera well in advance.

To compare, in the early 20th century, and maybe the late 19th century, the onus was often placed on individuals to combat disease. There’s a big moral component and an individual component to what’s called “the new public health model” in the era of the 1918 pandemic. As a result of that, at a governmental level, the underlying sort of systemic factors that contributed to the spread of infectious disease were ignored in favor of putting the onus on individual action.

Why was this idea of individual action popular at the time?

I think that it’s connected really strongly to germ theory because one of the side effects of germ theory is that the seat of disease becomes the individual. Disease is transferred from person to person.

So, the focus is on educating the individual, modifying the individual’s habits, and as a result, a lot of public health officials and physicians ignored or just didn’t pay attention to underlying systemic factors that would influence behavior or a range of behaviors available to people. Like we see today, not everybody is in a position where social distancing is an option. It was the same in 1918. You have people who are living in crowded tenement houses and are not able to avoid congregating. You have people whose livelihoods depend on close intimate contact with others. And there’s the focus on, “Oh, you need to do this and that and the other as an individual, as a person to make yourself a better person.” Rather than saying, “Here’s what we as a community need to do to fix what is wrong or what needs to be addressed on a systemic level.”

How did the idea of individual action affect the response?

Philadelphia in 1918 is a really good example of an object lesson of how not to do public health.

The city’s public health director, Wilmer Krusen, gets a lot of blame from historians and amateur historians for letting the parade that we’ve all heard about go on in 1918 that led to the spike in cases in Philadelphia. Some historians have started to push back against that and say that it wasn’t necessarily within Krusen’s power to cancel it. Especially because the mayor at the time, Thomas Smith, was such a “boss mayor,” very typical of what you might associate with that era.

Krusen toed a middle line between putting the ball in the court of individuals versus the government. So, when the state government ordered the closure of cinemas, theaters, ice cream parlors, and other places of social gathering, Krusen also added to that the closure of schools and places of worship. So, he recognized in a way that a lot of historians have ignored that there was a role for umbrella government initiatives to enforce what we would call social distancing.

There were things done wrong, and a lot had to do with corrupt politicians. If you look at the mortality rate of the 1918 flu pandemic, the top three cities are Pittsburgh, Scranton, and Philadelphia. Not only are they all in Pennsylvania, which had a lot of government corruption at the time, but they’re all cities with big boss mayors or boss governments.

The most obvious thing that’s associated with ‘boss politics’ is corruption, corruption, corruption. Like a mayor who makes nails and sells them to the city and has the city buy them at exorbitant prices. It’s basically just running the government like a machine, like a business. Appointing people to positions based on personal financial interests and operating in ways that might seem pretty familiar on the federal level today.

So what kind of lessons can citizens and governments take from the cholera epidemic?

Public health organizations, and the government more broadly, need to be invested in preparation for an infectious disease outbreak, even when there is no clear and present danger for such an outbreak.

Philadelphia in 1831 was preparing itself for cholera, but it was also already kind of prepared in the sense that there was already a strong history of public health, stretching back to the 1790s with yellow fever. Public health initiatives in Philadelphia really strengthened in response to that. The really clean municipal water supply is just one example of that.

For today, the big lesson from the cholera response is to be prepared, even in times when there isn’t an imminent risk for an outbreak.

What history has taught us about epidemics

Provided by
University of Pennsylvania

In Rakul Preet Singh Vs Dad, Guess Who Scored Zero In Badminton Match

Rates of alcohol-induced deaths increased from 2006 to 2018