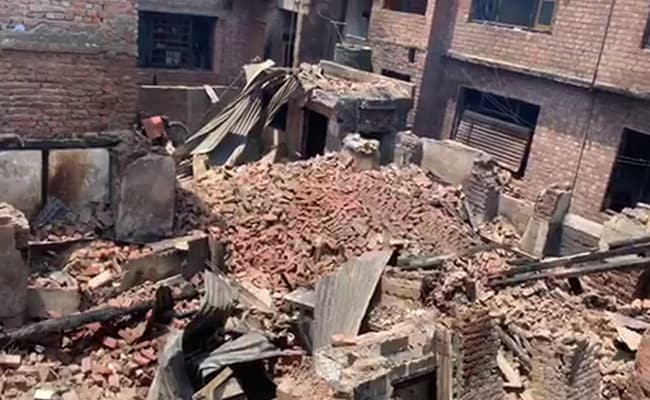 Several homes were destroyed in the ecnounter in Srinagar on Tuesday.

Charred currency worth over Rs 1 lakh meant to repair his house, sewing machines to eke out a living and all personal records – 55-year-old Bashir Ahmad Darzi has lost everything he had built. On Tuesday, when bombs hit his three storey home in downtown Srinagar, Mr Darzi’s dream to renovate home before his daughter’s wedding was shattered. Now, there is no home. Household objects are still smouldering. The anti- terrorist operation by Jammu and Kashmir police in which two terrorists were killed has left a trail of destruction. More than 15 houses have been severely damaged, some razed.

“These sewing machines were only source of income for my father. They have been destroyed. I work as a mechanic and earn up to Rs 5,000 a month. I’m not fully trained. We have lost everything including all documents,” said Adil Bashir, Mr Darzi’s son.

Adil is carrying a bag with burnt notes of Rs 500 and personal documents to show the magnitude of losses his family has suffered. His father, a tailor, had saved the money after years of hard work. While Mr Darzi is shocked into silence, his wife inconsolable.

“We had kept Rs 1.3 lakh for repair of home and look it is completely burnt. They didn’t allow us to take anything out, not even our clothes except what we were wearing that time,” said Adil.

For the last few years, destroying target houses during anti-terrorist operations has become part of an aggressive security doctrine in Jammu and Kashmir. It is meant to prevent casualties on security forces and discourage people giving shelter to terrorists. After every encounter, people are rendered homeless. The encounter is a chilling reminder; for killing two terrorists, more than 15 families had to pay a heavy price.

Security forces use heavy weapons like mortar and IEDs to bring down houses where they think terrorists have taken shelter. Official source say more than 100 houses have been razed to the ground in security operations in the last one year.

Since January this year, there have been 28 encounters in the Valley in which 65 terrorists were killed.

Hilal Ahmad said he was woken up after the police barged into his home at 2 am and took him out. What followed was blasts and heavy firing. Hilal says he helplessly watched his home and neighbourhood go up in flames. The four storey house is badly damaged, everything is reduced to rubble and ashes.

“Whatever I had is destroyed. I was left with one underwear and trouser which I was wearing at that time,” said Hilal Ahmad.

The police suspect there could be unexploded explosives still lying in the debris. They have put signs asking people not to venture into razed structures.

But Nusrat, a single parent of her two daughters, is making rounds of her destroyed house. She is looking at damaged walls and household things which are reduced to rubble. Nusrat was stuck in her home with her bedridden mother-in-law when firing broke out. She says her family was the last one to be evacuated. But when they returned, Nusrat found her world was devastated.

“Where will I go now? Everything is gone. You look around and see. I am still under a debt of Rs 3 lakh spent on its construction,” she said.

The devastation of the neighbourhood has moved good Samaritans into action. Hundreds of locals are generously donating for the rehabilitation. Through the local mosque committee, they have already collected 1.6 crore rupees. The committee says an initial compensation of Rs 2 lakh has already been given to the families. Officials say Srinagar Red Cross has also provided Rs 5,000 to each victim family.

“If militants were hiding in one house, why did they set about 20 houses on fire? We have locally decided that we will rebuild their homes. We will rebuild their lives. We have already paid Rs 40 lakh to them – 19 families who lost their homes and family of a boy who was killed. They were also given Rs 2 lakh,” said Abdul Rehman Dar, president of the Masjid Committee.

Here’s How You Can Play PUBG on PC