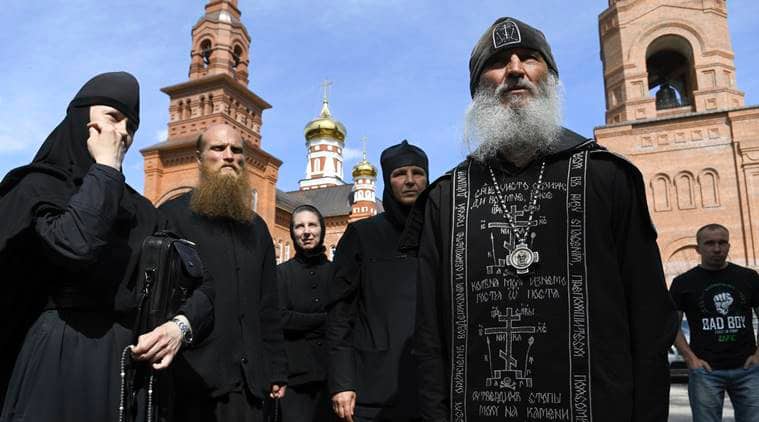 The Russian Orthodox Church on Friday defrocked a coronavirus-denying monk who has defied Kremlin lockdown orders and taken control of a monastery.

A church panel in the Ural Mountains city of Yekaterinburg ruled to defrock 65-year-old Father Sergiy, who has attracted nationwide attention by urging believers to disobey church leadership and ignore church closures during the pandemic.

The monk didn’t show up at the session and dismissed the verdict, urging his backers to come to defend the Sredneuralsk women’s monastery where he has holed up since last month.

In Friday’s video, Father Sergiy denounced President Vladimir Putin as a “traitor to the Motherland” serving a Satanic “world government” and dismissed Russian Orthodox Church Patriarch Kirill and other top clerics as “heretics” and “enemies of God and Holy Mother of God” who must be “thrown out.”

The monk called for an all-Russia assembly to put Putin, Patriarch Kirill and his entourage on trial to prevent them from plunging the country into a civil war.

“We can’t allow that wolf pack to mangle Russia and the neighboring nations,” he said.

The church banned the monk from ministry in May, but he has continued preaching and last month took charge of the monastery outside Yekaterinburg that he had founded years ago. Scores of volunteers, including battle-hardened veterans of the separatist conflict in eastern Ukraine, helped enforce his rules, while the prioress and several nuns have left.

The police visited the monastery last month a day after Father Sergiy took over, but found no violations of public order. Facing stiff resistance by his supporters, church officials have appeared indecisive, lacking the means to enforce their ruling and evict the rebellious monk by force.

Father Sergiy, who was born as Nikolai Romanov, served as a police officer during Soviet times, then left the ranks and was sentenced to 13 years in prison on charges of robbery and assault. After his release, he joined a church school and later became a monk.

The charismatic monk quickly became widely known for his enthusiastic efforts to open new churches and monasteries in the Urals. In his fiery sermons, he denounced alleged plots of the “world government” and glorified Russia’s last czar, Nicholas II, who was killed by the Bolsheviks along with his entire family in Yekaterinburg in 1918.

Father Sergiy has been the most visible and outspoken of a few ultra-conservative Russian Orthodox clerics who have challenged the church leadership. The top church hierarchy has avoided conflict with the monk until he openly defied the Kremlin and the Moscow Patriarchy during the coronavirus pandemic.

As contagion engulfed Russia, Father Sergiy has declared the coronavirus non-existent and denounced electronic passes introduced in Moscow and some other regions to stem the outbreak as “Satan’s electronic camp.” The monk has described the vaccines being developed against COVID-19 as part of a global plot to control the masses via chips.

He also urged believers to disobey the closure of churches during the nationwide lockdown. Orthodox churches across Russia were closed to parishioners on April 13 amid a quick rise in COVID-19 cases and were allowed to reopen in early June as authorities eased restrictions.

Speaking in a video from his monastic cell where icons and images of Orthodox Church hierarchs of the past adorn the wall alongside pictures of Russia’s last Czar and Soviet dictator Josef Stalin, Father Sergiy warned church officials that they will need to seize the monastery by force to get him out.

“I’m calling on all Orthodox believers to come to defend the monastery,” he said in his latest video. “I will not leave the monastery.”

Modi’s Ladakh visit will pep up troops but PM should clarify if China took our land: Adhir

75th anniversary of end of WWII is mostly virtual amid coronavirus