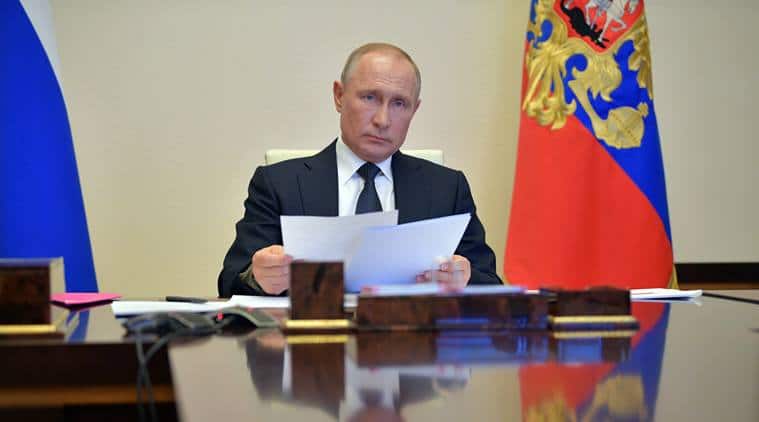 
The balloting completes a convoluted saga of concealment, deception and surprise that began in January when Putin first proposed the constitutional changes in a state-of-the-nation address. (File)

Russian President Vladimir Putin is just a step away from completing his main political project of the year – constitutional changes that would allow him to extend his rule until 2036.

A nationwide plebiscite on the amendments that would reset the clock on Putin’s tenure and enable him to serve two more six-year terms is set to wrap up Wednesday after a week of early balloting.

For the first time in Russia, polls were open for a week to help reduce crowds and to bolster turnout amid the coronavirus pandemic. Putin is all but guaranteed to get the result he wants following a massive campaign to get Russia’s voters to say “yes” to the changes.

However, the plebiscite intended to consolidate his hold on power could end up undermining his position because of the unconventional methods used to boost participation and the dubious legal basis for the balloting.

The balloting completes a convoluted saga of concealment, deception and surprise that began in January when Putin first proposed the constitutional changes in a state-of-the-nation address.

He offered to broaden the powers of parliament and redistribute authority among the branches of the Russian government, stoking speculation he might continue calling the shots as parliament speaker or as chairman of the State Council when his presidential term ends in 2024.

The amendments, which also emphasize the priority of Russian law over international norms, outlaw same-sex marriages and mention “a belief in God” as a core value, quickly sailed through the Kremlin-controlled parliament.
As speculation swirled about Putin’s future, the 67-year-old leader remained poker-faced until March 10. That’s when legislator Valentina Tereshkova, a Soviet-era cosmonaut who was the first woman in space in 1963, suddenly proposed a measure to let Putin run two more times.

In a carefully choreographed show, Putin then arrived in parliament just before the final vote to endorse Tereshkova’s proposal.

The maneuver stunned Russian political elites who were busy guessing about Putin’s future and possible successors. Many saw the resetting of term limits as an attempt by Putin to avoid becoming a lame duck and to quell a power struggle in his inner circle.

The Russian president, who has been in power for more than two decades – longer than any other Kremlin leader since Soviet dictator Josef Stalin – said he would decide later whether to run again in 2024. He argued that resetting the term count was necessary to keep his lieutenants from “darting their eyes in search for possible successors instead of normal, rhythmical work.”

While Putin used his KGB-honed skills of deception to delude both the public and his own entourage, he complicated his constitutional plan by putting it to voters even though parliamentary approval was sufficient to make it law.

The move was intended to showcase his broad support and add a democratic veneer to the constitutional changes. But it backfired weeks later when the coronavirus pandemic engulfed Russia, forcing Putin to postpone the plebiscite originally scheduled for April 22.

The delay stymied Putin’s campaign blitz and left his constitutional reform plan hanging as the damage from the virus mounted and public discontent grew.

Amid the uncertainty, Putin rescheduled the vote immediately upon seeing the first signs of a slowdown in Russia’s infection rate even though the number of new confirmed cases reported daily remains high.

“A late vote could have been lost. Holding it in the autumn would have been too risky,” Schulmann said. She noted that the vote comes shortly after the government’s lifting of coronavirus restrictions helped brighten the public mood.
“The early date has an advantage of coming soon after lifting the quarantine restrictions that made voters feel more optimistic,” she said. “And in general, people are in a better mood during the summer season.”

Schulmann argued that the Kremlin’s focus isn’t so much on boosting overall turnout but rather on increasing attendance by the public sector workers who make up Putin’s base.

The authorities have mounted a sweeping effort to persuade teachers, doctors, workers at public sector enterprises and others who are paid by the state to cast ballots. Reports surfaced from many corners of the vast country that managers were coercing people to vote.

Good start to monsoon, country gets 18 per cent excess rain in June