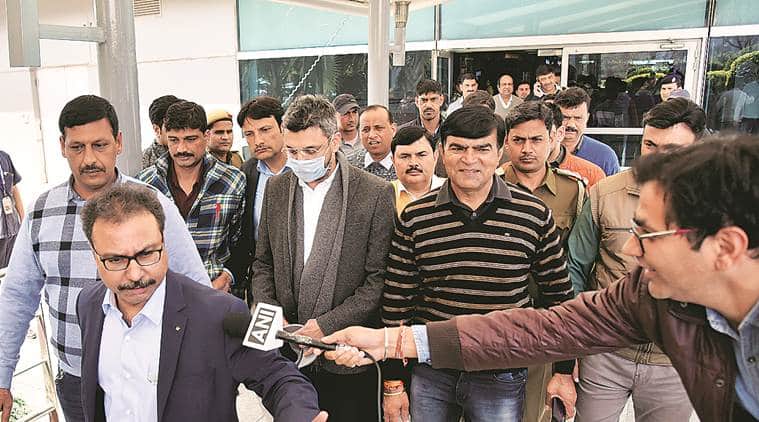 
Sanjeev Chawla was extradited from the United Kingdom in February. (Source: File Photo)

The advocate representing Sanjeev Chawla, prime accused in the 2000 cricket match-fixing scandal, has called his client’s disclosure statement, that is part of the supplementary chargesheet submitted to the court, “a figment of imagination of the police”.

“The statement purportedly given by Sanjeev Chawla on 14/02/2020 is a figment of imagination of the police. This document was never shown to him, thus there was no question of refusing to sign. He saw this document for the first time when the copy of supplementary chargesheet was served on him,” senior advocate Vikas Pahwa told The Indian Express.

In the said statement Chawla had allegedly mentioned the role of the underworld mafia in widespread cricket corruption. The statement said that no cricket game was “fairly played” and the fixed games were akin to “movies which are already being directed by someone”. Chawla is also said to have told Delhi Police that the “syndicate” had on its target DCP (Crime Branch) Dr G Ram Gopal Naik and that his life too was under threat.

Pahwa said his client had said no such thing. “He has no knowledge of any syndicate or underworld mafia which is mentioned in this absurd document. There is no threat to him or anybody else”.

He also said that “…He (Chawla) has categorically denied having any knowledge or involvement in any kind of match-fixing or ever being a cricket bookie.”

Delhi Police in its chargesheet says Chawla “remained non-cooperative and did not divulge any detail with regard to the offences committed by him … even after he was confronted with the evidences … this clearly prove his involvement in this case…”. It also says that the accused didn’t sign the disclosure statement “even after reading it carefully”.

Pahwa says his client’s “denial of all false allegations has been construed as his guilt which is preposterous.”

The senior advocate also stressed that Chawla has fully cooperated with the investigators. “When the FIR was registered in April 2000, he was not even in India. He has never absconded. During the period of investigation for 14 years, he was never contacted by Delhi Police, except for one letter to his solicitors written by Scotland Yard.”

He further stated, “After his release, he has given his handwriting for examination. He offered himself for voice samples, but the same have not been taken till now. He has full faith in the Indian judicial system. Post his release, he is staying with his family in Delhi”.

Commenting on the nature of case, Pahwa said, “This case is difficult to stand in a court of law as no offence of cheating is made out… here is an endeavour to malign the game of cricket due to some vested reasons.”

When contacted, DCP (Crime Branch) Dr G Ram Gopal Naik said: “We have already submitted supplementary chargesheet against him. The matter is sub-judice.”

Chawla, in the first week of May, had walked out of Tihar jail in the absence of a High Court stay on the trial court’s April 30 bail order. Following this relief, Delhi Police approached the Supreme Court on May 13, challenging the High Court order.

The matter will come before the Patiala House Court on July 4 where arguments on the charges will be heard.

Meet the Jayarams: The IIT couple at forefront of VR in sports

The spinner’s hand speed is a giveaway: Barry Richards