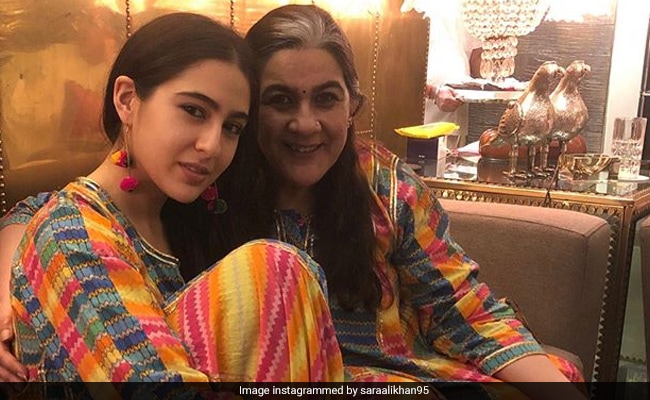 We got a glimpse of Sara Ali Khan and her mother Amrita Singh’s well-spent day out through the Simmba actress’ Instagram profile. Amrita Singh might be a social media recluse but she frequently features on her daughter’s Instagram profile. In one of the pictures posted by Sara, the mother-daughter duo can be seen sitting pretty, dressed in matching traditional outfits. In another photograph, Sara and Amrita Singh can be also be seen twinning – with matching masks. The caption on Sara Ali Khan’s Instagram post read, “Mommy’s Day Out.” She added the hashtags #twinning and #winning and to her post.

Amrita Singh frequently appears on Sara’s Instagram. Remember when Sara tried to recreate her mother’s look? The one where she posted a collage, in which Sara and Amrita could be seen sitting in a similar fashion, dressed in traditional outfits. “Like mother, like daughter,” she captioned the post.

On Mother’s Day this year, Sara shared this priceless throwback:

Sara Ali Khan trended big time recently when she stepped out of her house and was photographed at Atrangi Re director Aanand L Rai’s office.