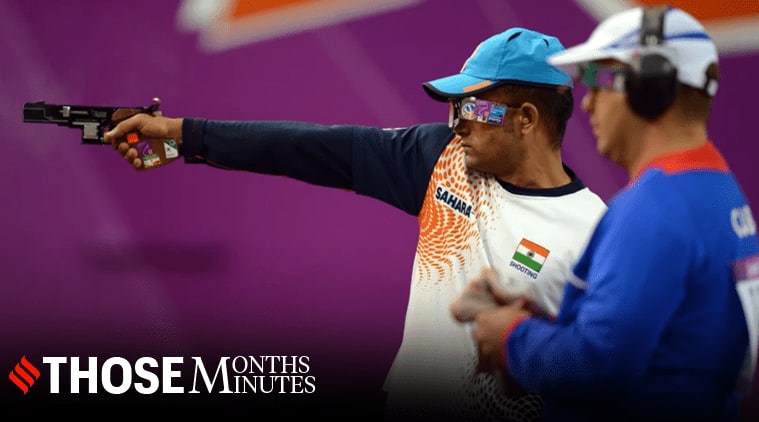 It was nearing midnight, on August 1, 2012. It was long past Vijay Kumar’s usual bedtime, but he couldn’t shake away those nagging nerves that forced him to think about what was to follow the next day. He had spent most of the day – the eve of his first ever Olympics participation – thinking about the pressure of competing in the most prestigious tournament in his sport.

Eventually, the eyelids grew heavy. But just as he was about to nod off, Vijay remembers being shaken awake by loud thunder. This being London, rain without warning was not unexpected. Kumar though, 26 at the time, had a new reason to worry.

“Usually I sleep latest by 10 at night. But I just wasn’t getting sleep at the time. The mind was racing. Eventually, I was just about dozing off and it started to rain heavily,” he recalls. “Then I couldn’t sleep because I started to worry again. I knew it was going to be a cold day tomorrow.”

Vijay estimates it was around 5 degree Celsius, but the strong winds made it all the more unbearable, when he made it to the Royal Artillery Barracks. At every opportunity he got, he clutched the hand warmers in his pockets, the ones his coach Pavel Smirnov had given him, hoping there was enough heat to keep his trigger finger consistent through the men’s 25 metre Rapid Fire event. But the pistol shooter knew that with weather conditions like this, it wasn’t his physical strength that would be his greatest ally: he needed to be mentally focused.

Vijay closed his eyes and drew in a deep breath once he took his position for the first qualification round. He remembered the process he had tried to perfect each day in practice for the last six months. Quietly, the nerves lifted. The visualisation process – that virtual shot of cortisone for the mind – started to kick in.

A day later, he’d stand on the second step of the podium, sporting a glittering silver medal around the neck, and an equally bright smile on the face.

A year earlier, in 2011, there was a different problem niggling Vijay. A bout of chikungunya had robbed him of a chance of competing at the 2008 Olympics in Beijing. Now he needed a quota to secure a spot in the Indian team for London 2012.

In May that year, he travelled to the United States for the World Cup at Fort Benning, Georgia, and won the silver medal in his discipline, and the quota.

“There was some kind of relief in the mind because the first step (to competing at the Olympics) is to win the quota. Winning that quota place, you feel relaxed. That burden was no longer there now,” he says. “Later in the evening, I cut a cake with my teammates. But things were going to get a lot more intense now that the quota was secured.”

It wasn’t until 2012 came around that preparations specific to the Olympics started. The first change was the amount of time he had started to put in with his coach in training.

“I sat with the coach and started making a training programme. We had training camps in Germany, Poland, and played international competitions as well. But importantly, the schedule was modified to make sure there was more training,” he says. “The six months before the Olympics, I trained every day for an extra hour or two – that’s in addition to the six hours I’d spend in training every day.

“The biggest challenge was to train my mind that I was going to play the Olympics, especially with this being my first time. You do the mental training before other competitions like the Asian Games and Commonwealth Games as well, but this event was bigger. At the Olympics, there is a lot of extra pressure. It’s a prestigious competition, there are so many expectations from people. So, I had to prepare myself mentally for that. I just wanted to go there and shoot well.”

A bout of chikungunya had robbed Vijay Kumar of a chance of competing at the 2008 Olympics. (Express File Photo)

Training the mind meant a lot of time dedicated to visualisation exercises. It was something Vijay had tried in the past, but not consistently.

“I had a habit that whatever the coach said, I would do for a month without question. I tried visualisation, meditation and everything and felt my scores and pressure-controlling power had started to increase in training and during domestic competitions ahead of London,” he adds.

Those visualisation exercises – coupled with the extra time he had dedicated to himself – made the difference. But what was it that he visualised?

“When you are standing in the range,” he explains, “how do you lift your hand, at what moment do you pull the trigger, how do you take aim, when do you breathe, focus on the heartbeat, focus on the stance. During the final especially, I was thinking only about this and how to shoot a good series. Not the outcome.”

Which explains why there were no over-the-top celebrations once he had clinched the medal. He was calm and composed, with nothing more than a thoughtful smile on his face as he stood on the podium. Vijay had, after all, not spent a thought about how to celebrate. All he had trained for, all that he knew was how to perform.

“No matter what competition you are going for – any competition, big or small – there will always be people telling you to win a medal,” Vijay says. “There is only one thing I can do in such a situation. I smile and tell them I’ll do my best.”

This message was repeated from fans and supporters when he was boarding his flight to London in July 2012. But Vijay asserts his mind never wandered towards the thought of actually coming home with an Olympic medal. His “only goal was to score and perform better. That’s all.” But the pressure had started to build nonetheless.

Meanwhile his coach, Smirnov, had started talking more frequently with his ward, an Olympic debutant. The chat would seldom address any technical changes Vijay needed to bring into his game. Instead, it was all about trying to relieve him of the pressure.

“It is fine, you’re still young, this is your first Olympics…” Vijay recites what his coach would say. “He wanted to stop all the negative thinking. I felt relaxed because the coach was not putting any pressure on me.”

But then the rain came pouring.

The conditions made it harder for competitors in an event that requires a great measure of speed coupled with the precision needed to hit the 1 cm-wide bullseye, 25 metres away. The rapid fire event, an outdoor event, is considered one of the most entertaining, but can also be the most gruelling. Till that point, India had no great history in it either.

But somewhere in his mind, Vijay was quietly growing confident.

“At the end of the first day of qualification, I was in sixth place (six players make it to the final). I realised that I could actually make it to the final. But still it was a tough day. It was raining and very cold. It’s a quick event and you don’t have time to warm your hands. But I was mentally prepared. Somehow, it all worked,” he recalls.

In the evening, he explained his thoughts, fears and hopes to his coach during a relaxing game of pool. Smirnov this time called for more of the same.

Sleep, yet again, didn’t come that easy. But Vijay showed no ill-effects when he entered the range on the second day. At the end of the second qualification round, he was in fourth place and had qualified for the final.

Stepping into position in the Royal Artillery Barracks, he remained focused on the task. This was the furthest any Indian had been in the rapid fire at the Olympics, but he shunned that thought. He closed his eyes and started to visualise, trusting the process, and at each interval, never once fell below the top three places in the final.

In the final, Vijay was joined by the likes of Alexei Klimov of Russia, who had set a new world record in the qualification round, eventual gold medallist Leuris Pupo of Cuba, and Germany’s Christian Reitz, often considered the successor to legendary three-time Olympic gold medallist Ralf Schumann (Reitz won gold at the 2016 Rio Games).

The scoring in the final essentially means only a shot valued at 9.7 or above is considered a hit – each competitor shoots a series of five shots within four seconds. By the first interval, Vijay was tied with Chinese marksman Ding Peng on 16, trailing only Pupo (18). Vijay and Peng had the same score at the end of the next two intervals, 20 and 24 respectively, while Pupo remained two shots ahead of them.

“The only time I relaxed during the final was when I realised I was in the top three. The medal was secured. At that time, Ding and I were on the same score (24) and we were trailing the leader Pupo of Cuba by two points. Ding was shooting before me. He shot 3. There was a chance. I scored a 4. That was good enough to go into second place and win the silver.”

On the podium, the celebration was bland – a far cry from German discus thrower Robert Harting’s exuberant hurdle-jumping exultation. But that didn’t mean there were no festivities at all.

In the evening, Vijay cut another cake with his teammates. It reminded him a bit of the one he had cut after winning the Olympic quota at Fort Benning a year earlier. A perfect end to this Olympic chapter – just the way it started.

Eid 2020: This Keema Meat Masala By DHABA Restaurant Will Liven Up Your Festive Spread

Active shooter at US Navy air base ‘neutralised’, area on lockdown

Travelling Fans concern Being Victims Of Greed when Olympic Postponement

Couldn’t hold back tears: Rani Rampal after getting Khel Ratna