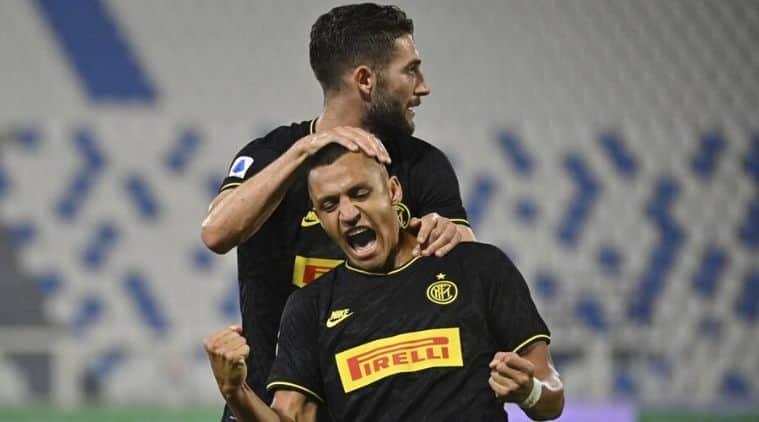 
Inter Milan’s Alexis Sanchez, front, celebrates after scoring a goal during the Serie A soccer match between Spal and Inter Milan, at the Paolo Mazza Stadium in Ferrara, Italy, Thursday, July 16, 2020. (Massimo Paolone/LaPresse via AP)

Inter Milan reignited its faint hopes of winning the Serie A title by thrashing bottom-place Spal 4-0 on Thursday.

Inter dominated from the start but took until eight minutes from halftime to break the deadlock when Candreva fired home following a pinpoint assist from Sánchez.

Biraghi doubled Inter’s lead 10 minutes after the break and he set up Sánchez five minutes later with a cross from the left.

Gagliardini had the easiest of finishes to add to the scoreline when he prodded in Ashley Young’s cross.

Genoa remains in trouble as it is only one point above 18th-placed Lecce.

In Turin, the home side took the lead in the 32nd minute when Bremer headed in a corner from Simone Verdi.

Lukić was brought on for Verdi in the 67th and he doubled Torino’s lead nine minutes later when he curled into the top corner from long range.

Belotti capped a good night for the home side in the final minute, scoring for the seventh straight match, with a powerful shot after intercepting a poor back pass from Genoa forward Goran Pandev.

Upstart Lyon fuel debate on how to reform Champions League

Europa League 2020, Sevilla vs AS Roma Live Streaming: When and where to watch?

I am obsessed with Rishabh Pant, he is an absolute match-winner: Sourav Ganguly