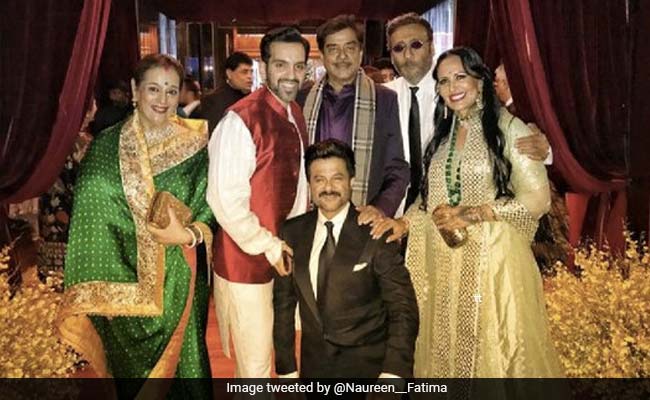 Can you spot Sonam in the picture? (courtesy: Naureen__Fatima)

Sonam Kapoor, who celebrated her 35th birthday on Tuesday, received a lot of love from her fans, friends and family in the form of social media posts. One such wish came from Bollywood veteran Shatrughan Singh. The actor meant well and shared a picture on his Twitter profile, wishing the birthday girl. The only problem was that Sonam was missing in the picture. The photograph shared by Shatrughan Sinha featured his wife Poonam Sinha and son, Sonam’s father Anil Kapoor, actor Jackie Shroff and his wife Ayesha Shroff. What was an innocent mistake, turned into an opportunity to extract a stock full of memes for Twitter. While some users made Mr India references (more on that later), others found a quick fix by Photoshopping the birthday girl in the frame.

Shatrughan Sinha might have deleted the tweet that was posted along with the picture, but in a separate tweet he wrote: “Warm and loving birthday wishes for a pretty, style icon, very dear and lovely actress Sonam Kapoor. She is the worthy daughter of our neighbour, very friendly, loveable actor, worthy father Anil Kapoor. May you continue to charm with your endearing smile and stay abundantly blessed.”

Okay, we were sort of expecting Mr India references in a few tweets and that happened. Not that this requires an explanation but still, we are here to help. A Twitter user linked Sonam being MIA in the picture to a 1987 film that is deeply embedded in our cultural consciousness – Mr India, of course. The film starred Sonam’s father Anil Kapoor as an invisible hero. A Twitter user wrote: “So this confirms that Sonam Kapoor will be the protagonist in the sequel to Mr India.”

So this confirms that Sonam Kapoor will be the protagonist in the sequel of Mr. India

Good question, is all we can say.

The one with a Sonam Kapoor film still.

Some Twitter users found a quick fix to the entire problem and Photoshopped the birthday girl in the picture. As simple as that.

This Twitter user cracked the curious case of Sonam Kapoor. Turns out, it was Photoshop +Mr India bracelet.

Now We Know Why Sonam Wasn’t Visible. Look At Her Hand. Is That Mr. India’s Band ?https://t.co/4j1mq6Skv0pic.twitter.com/4Uav5xhCcm

Sushmita Sen Was Asked How She Survived Nepotism In Bollywood. Her Reply