Cyclone Amphan: Mamata Banerjee monitored the progress of the cyclone from a contriol room in Kolkata

After Cyclone Amphan left buildings destroyed, power lines and roads damaged and parts of Bengal flooded, Chief Minister Mamata Banerjee called it a “catastrophe”. 12 people have died and the count could go up, she said last night at her office in Kolkata, where a control room had been set up to monitor the cyclone.

“Shorbonash hoye galo (it is a catastrophe),” said Mamata Banerjee, calling the impact of Amphan “worse than coronavirus”.

She used the word “tandav (dance of fury)” to describe the impact of the storm, the worst to form over the Bay of Bengal in years. 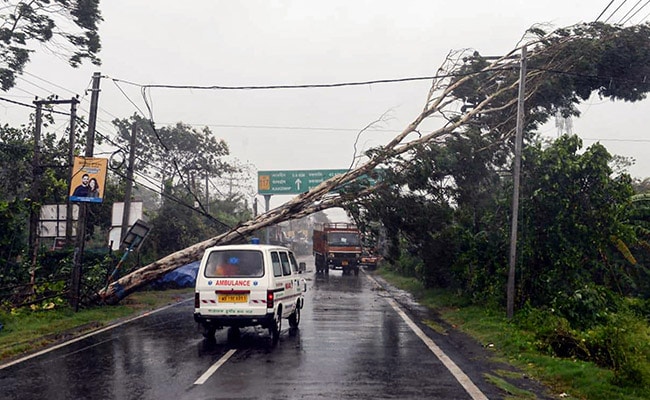 Cyclone Amphan: A tree falls on power lines during strong winds due to Cyclone Amphan at Kakdwip near Sunderbans area in South 24 Parganas district of West Bengal.

“I am sitting in the war room. My office in Nabanna is shaking. I am tackling a difficult situation on a war footing,” she said on Wednesday evening.

The cyclone ripped through the coastal districts of North and South 24 Paraganas of Bengal with heavy rain and windstorm, blowing away thatched houses, uprooting trees, electric poles and flooding low lying areas.

Strong winds with speed up to 125 kmph per hour upturned cars in Kolkata and left trees and electricity poles torn off and blocking roads.

There was a massive power cut in large parts of Kolkata, North 24 Paraganas and South Paraganas. The mobile and internet services were also down as the cyclone had damaged several communication towers.

Portions of several decrepit buildings came crashing down in Kolkata. The Kolkata airport, which had been shut, was left flooded and many structures within damaged.

Visuals showed big waves crashing into a seawall in Digha and Sunderban region.

“Area after area has been devastated. Communications are disrupted,” said Ms Banerjee , adding that although 5 lakh people had been evacuated, state authorities had not entirely anticipated the ferocity of the storm.

She estimated that the damage was worth Rs one lakh crore.