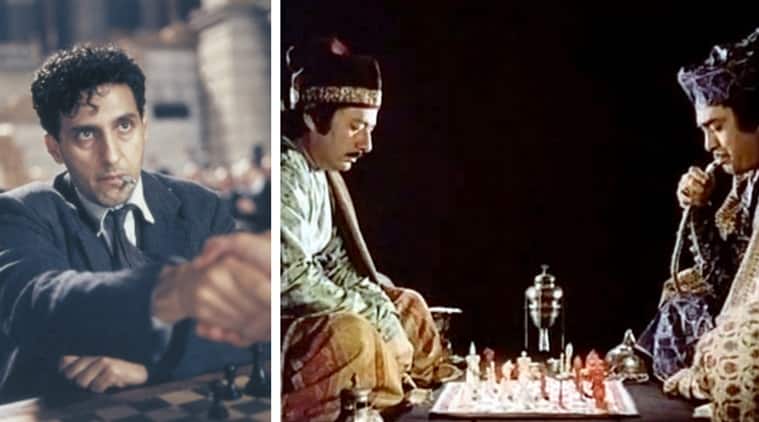 
John Torturro in ‘The Luzhin Defence’; a still from ‘Shatranj ke Khiladi’ (Screenshots)

In the unprecedented change the Covid-19 pandemic has brought to the sports landscape around the world, with travel bans forcing most global sports to postpone their events, chess is one sport which has managed to be insulated, even managing to regain some of its popularity.

There has been large-scale participation in chess, both competitively and recreationally, from people via computers during the lockdown. The essence of the mind sport has been beautifully presented on screen for those unfamiliar with the sport to get a glimpse of how interesting and exciting it can be – similar to how many great films have depicted the game and even centred their films on the game over the years.

Here is a look at a few great films portraying chess:

The 2016 film by Mira Nair is an on-screen depiction of the life of Phiona Mutesi, a girl from Katwe, a slum in Kampala, Uganda, and her journey towards becoming a Woman Candidate Master.

Produced by Walt Disney Pictures and starring Madina Nalwanga and Lupita Nyong’o, the film is unique for being a chess movie based on the life of an African woman, when most of the chess movies depict the stories of white men.

Despite having a limited release, the direction and messaging of the movie received a lot of praises, and the movie went on to win a lot of awards at various award functions.

The 2014 Edward Zwick directorial is a biographical drama on the rise of Bobby Fischer from a young chess enthusiast in New York to winning the World Chess Championship in 1972.

READ | Five of the greatest chess matches ever played

The film stars Tobey Maguire as Fischer and Liev Schreiber as Russian grandmaster and Fischer’s rival, Boris Spassky. The film was well received by both critics and audiences alike, and was particularly praised for its portrayal of Fischer’s mental health, his paranoia and the dark side of an unhealthy obsession with chess.

The performances of the main cast were highly appreciated and the film has developed a cult following in the years that followed.

Based on the real-life story of Genesis Potini, a New Zealand chess player who suffered from bipolar disorder, the movie depicts how Potini trains disadvantaged children to instill in them the discipline and skill necessary to succeed in chess.

With chess being used metaphorically to develop skills necessary to succeed in life, the Cliff Curtis-starrer was widely appreciated, sweeping awards across New Zealand and even being labelled by some Kiwi journalists as ‘one of the greatest films to come out of New Zealand’.

The inspirational film has developed its own niche fan base since then, and is a huge fan favourite among chess enthusiasts.

Based on Vladimir Nabokov’s book The Defence, the Marleen Gorris directorial chronicles the journey of a mentally tormented young chess grandmaster and the woman he meets while competing at a chess tournament in Italy.

Starring John Turturro and Emily Watson, the romantic drama is particularly famous for the final chess match between Turati and Luzhin. The usage of chess in other plot points throughout the movie, and the detailed focus on the protagonist’s mental breakdown as the movie progresses, have contributed to the movie being viewed as a classic in today’s time.

READ | When the wait finally ended for Viswanathan Anand

The climax of the movie, though dissimilar to the book, is considered to be one of the best in any chess-based movie.

Contrary to what the title suggests, the movie isn’t about grandmaster Bobby Fischer at all, rather the plot focuses on young chess prodigy Josh Waitzkin and how his coach and family attempt to nurture his natural talent for chess. The title of the film is a reference to Waitzkin’s quest to develop his abilities to the level of Fischer’s as he progresses in the world of chess.

Starring Max Pomeranc in the lead role, and having exceptional performances from Ben Kingsley and Laurence Fishburne, the film has been adored by chess fans all around the world.

The film was even nominated for best cinematography at the 66th Academy Awards, and is often rated as one of the most well-made chess
movies ever.

The 1977 film, based on Premchand’s short story of the same name, was legendary director Satyajit Ray’s first Hindi directorial. Starring Amjad Khan and Richard Attenborough, along with Amitabh Bachchan as the narrator, the film was widely appreciated all around the world, even being India’s entry for the Best Foreign Language Film at the 51st Academy Awards.

Literally meaning ‘The Chess Players’, the film, set in 1856, chronicles the life of two men devoted to the game of chess against the backdrop of the British East India Company’s schemes and ploys. With Ray’s signature style, the film is considered to be one of his best works and one of India’s best chess-based movies.

‘Magnus’, a 2016 documentary on the life of Magnus Carlsen, 2012’s ‘Brooklyn Castle’ and Liz Garbus’s ‘Bobby Fischer Against the World’ are a few other films made on chess deserving mention.

IPL 2021 Live Cricket Streaming: When and Where to Watch CSK vs RCB and SRH vs DC Match Online?