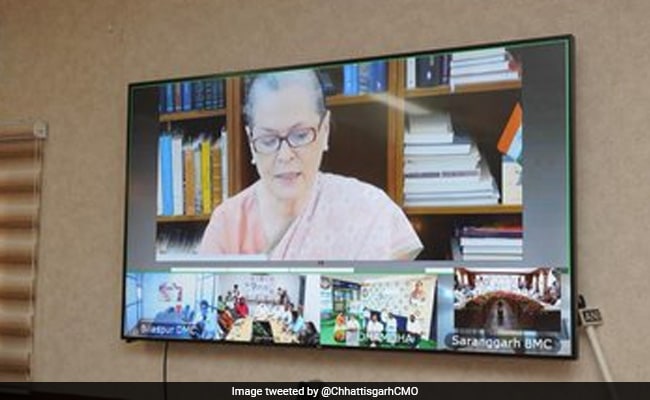 Congress president Sonia Gandhi launched the Rajiv Gandhi Kisan Nyay scheme in Chhattisgarh through video conferencing today and said this was a true tribute to the former prime minister.

Addressing the launch event on the occasion of Rajiv Gandhi’s death anniversary, she lauded the scheme, saying it will bring a change in the lives of farmers and help them become self-reliant.

“Such schemes should be implemented at the ground level to help bring a change in the lives of people. This is a revolutionary scheme and is a true tribute to Rajiv Gandhi. This is a big step taken in lines with the values of Rajiv Gandhi,” she said.

The Congress chief said there is a plan to include landless tribal agricultural labourers in the second phase of this scheme. “This is a very unique decision which will make them all self-sufficient,” she said.

Ms Gandhi also said that under the Rajiv Gandhi Kisan NYAY Yojana, provisions have been made to provide funds to the farmers of Chhattisgarh, to encourage crop production and send funds directly to their bank accounts.

She recalled how the former prime minister had love and respect in his heart for the farmers, especially women and tribal farmers, and he often visited the countryside to have direct communication with them.

Empowering the farmers, providing them with help in tough times, providing remunerative prices of their crops and leveraging technology to link agriculture with the country and abroad was his thought and commitment, the Congress president said.

Former Congress president Rahul Gandhi also lauded the Chhattisgarh government for launching the scheme at a time when the poor and farmers were facing hardships due to the coronavirus outbreak and the lockdown imposed to contain the spread of the disease.

He said people are suffering due to the coronavirus and the most affected are the poor.

He said the aim of the scheme is to help farmers earn more and bring more area in the state under cultivation, which currently stands at 20 per cent.

US could have avoided 36,000 deaths if social distancing had been imposed a week earlier: Research

Amid Virus Spike, Delhi Panel’s ‘Only Residents In Hospitals’ Advice