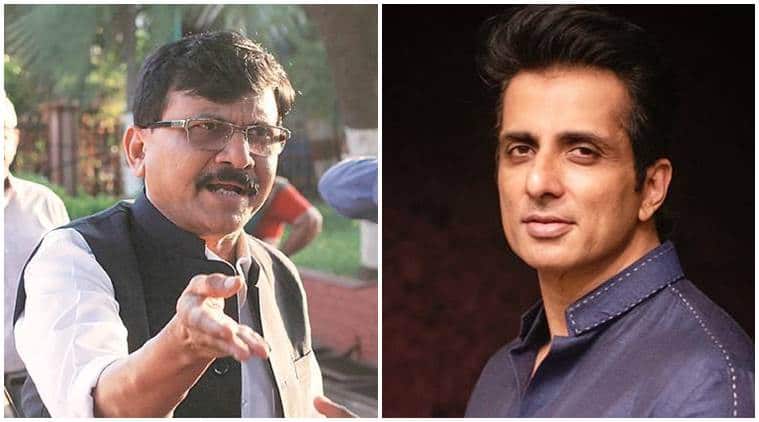 Shiv Sena leader Sanjay Raut Sunday wondered whether the BJP was behind Bollywood actor Sonu Sood’s recent efforts to help stranded migrant workers, in a bid to show the Uddhav Thackeray government in a poor light.

In his weekly column ‘Rokhthok’ in the party’s mouthpiece ‘Saamana’, Raut raised questions on the sudden rise of “Mahatma” Sood and referred to a sting operation ahead of the 2019 General Elections, which showed Sood accepting an offer to promote the BJP-led government on various social media platforms.

Sena’s attack came in the backdrop of Sood arranging buses and chartered flights for migrant workers stuck in Mumbai.

“Sood is an actor whose profession is to deliver dialogues scripted by someone else and make a living out of it. There are many people like Sood who would promote any political party if paid well,” Raut wrote.

He said no wise person would believe in Sood suddenly developing sympathy for migrants and making arrangements for them to return to their home states.

Raut, who is the executive editor of ‘Saamana’, said, “The BJP has (politically) adopted Sonu Sood and tried to create an influence among the North Indian migrant workers. The BJP was struggling to stay politically relevant during the coronavirus crisis and faced a severe backlash from public, who detested the frequent criticism of the Thackeray government by BJP leaders,” he stated. “The plight of migrant workers also turned many people against the Modi government for its handling of the coronavirus crisis,” Raut said.

He said it was important to find out whether the BJP had put a mask of a social worker on Sood and used him to further its political game. “There is a person called Shankar Pawar, who is the head of Rashtriya Banjara Seva Sangh and is  frequently seen standing behind Sood in various photographs. He has the huge system and network to send people home,” Raut said.

Defending the Maha Vikas Aghadi government, which also comprises the NCP and the Congress, over its handling of the migrant crisis, he said, “No other state could have treated migrant workers the way they have been taken care of by the Maharashtra government.”

The government has started a special unit to streamline the process to transport migrant workers to their native states, he said. “However, to show the state government’s work in poor light, Sood has been deliberately promoted. ‘If anyone wants to go home, please contact me’ was the appeal of the actor,” Raut wrote.

The senior Sena leader also claimed that the Bollywood actor had even got an invitation from Maharashtra governor B S Koshyari as appreciation of his work for the stranded labourers.

“Maharashtra chief secretary Ajoy Mehta should send a detailed list of people and organisations who served relentlessly and selflessly during the coronavirus crisis. Unfortunately, they do not have any political backing to promote their work,” Raut said.

Taking a dig at the BJP, Raut said people might soon get to hear Sood’s name in ‘Mann Ki Baat’, Prime Minister Narendra Modi’s monthly radio programme, and the actor meeting him in person in Delhi. “Sood might even visit Bihar, Uttar Pradesh, Delhi as a star campaigner for the BJP. When most of the actors were sitting at home, Sonu Sood’s acting skills were flourishing,” he stated.

“You do not need a screen all the time to show your acting skills, as has been demonstrated by Mahatma Sood. His political directors are experts in their field. We will soon come to know about his next political move,” he added.

Apart from sending thousands of migrants home, Sood has also lent support to Delhi BJP’s Mission Anivarya, which is aimed at free distribution of sanitary pads among underprivileged women in the midst of the Covid-19 lockdown.

Meanwhile, Maharashtra Home Minister Anil Deshmukh denied Shiv Sena having any such opinion of Sood and said the party will appreciate whoever takes good initiatives. Talking to news agency ANI, “Actor Sonu Sood has done good work by sending a lot of migrant workers to their homes. I did not hear what Sanjay Raut sahab said. We will appreciate whoever takes such good initiatives, be it Sonu Sood or anyone else.”

Mann Ki Baat: PM Modi to address nation at 11 am during 80th edition of radio programme