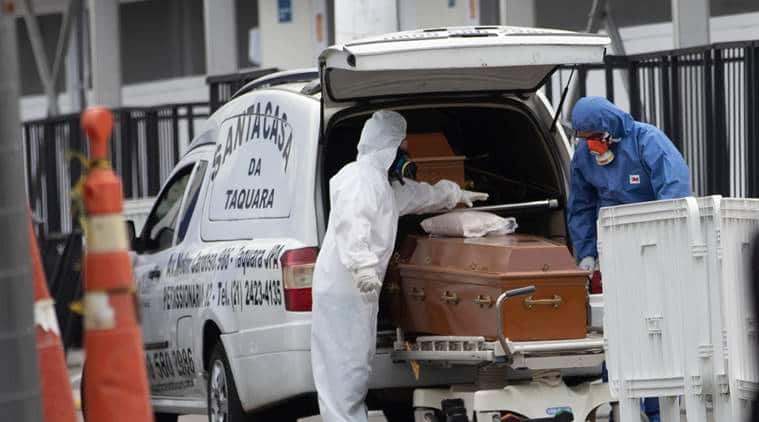 More than 70 ships are lined up at Brazil’s port of Santos to load sugar for export in a queue that may take a month to clear after buyers worldwide scrambled to get ahead of possible disruption caused by the ravages of the coronavirus pandemic.

A large share of the global sugar trade turned to Brazil, which posted record output, and after poor harvests in India and Thailand. The South American nation now has, however, the second-most Covid-19 cases worldwide at more than 610,000.

A vessel at the nearby Paranagua port had the same problem.”The situation has been complicated by the virus.

Everyone is nervous about what happens if vessels are unable to berth or load quickly,” said Stephen Geldart, head of analysis at food supply chain services company Czarnikow Group Ltd.In Santos, the flotilla is waiting to take more than 3 million tonnes of sugar to refiners worldwide, compared with just 15 ships to load 700,000 tonnes at this time last year, according to Williams shipping agency.

The typical wait time is 29 days, up from four or five days last year. Two sugar traders told Reuters that buyers were unlikely to cancel contracts, because it would be a high risk for them to find alternative supplies.”India would be an alternative, but they are having problems as well at ports due to coronavirus,” said Cheng Gonk Vin, head sugar trader at Brazil’s SCA Trading.

Vin said there will be additional costs for traders with ‘demurrage,’ a fee charged by vessel owners when ships stay longer than expected at ports. That charge is seen at around $20,000 per waiting day. “It is mayhem in Santos,” said a second trader, describing traders’ struggle to find space. He said some traders were negotiating with mills to postpone shipments.

Buyers of May raw sugar futures purchased 2.26 million tonnes for delivery in that contract, a monthly record. That sugar needs to be delivered to New York by the end of July and has increased the congestion in Santos. Asian commodities traders COFCO International and Wilmar International were the deliverers and will have to pay that demurrage.

COFCO and Wilmar did not return requests for comment.

“Many countries, particularly in Asia, fearing supply chain problems due to coronavirus decided to guarantee supplies to form strategic stockpiles,” said the head of one of the largest sugar groups in Brazil, who asked not to be named.

Some mills opted to send sugar to other ports to avoid delays.

Alta Mogiana SA, a producer based in Brazil’s main sugar belt, said for the first time ever it decided to send sugar to two ports other than Santos.

Sugar market dealers say that despite a smaller crop this season, India could benefit from logistical problems in Brazil.

“Indian mills will cash in on any drop in sugar supplies from Brazil due to the long line-up there,” said Rahil Shaikh, managing director at MEIR Commodities India.

There are still 1.5 million tonnes of sugar to be exported with help from government-approved subsidies, Shaikh said, which could make Indian output competitive.

Thailand is less likely to benefit after a poor crop hit by drought, said Virit Viseshsinth, deputy secretary-general of Thailand’s Office of Cane and Sugar Board.

The country has less than 6 million tonnes of sugar for exports for the crop year, significantly less than earlier years, most of it already committed.

Targeted killings are terrorising Afghans. And no one is claiming them

More than you need to know about Harry, Meghan and Oprah