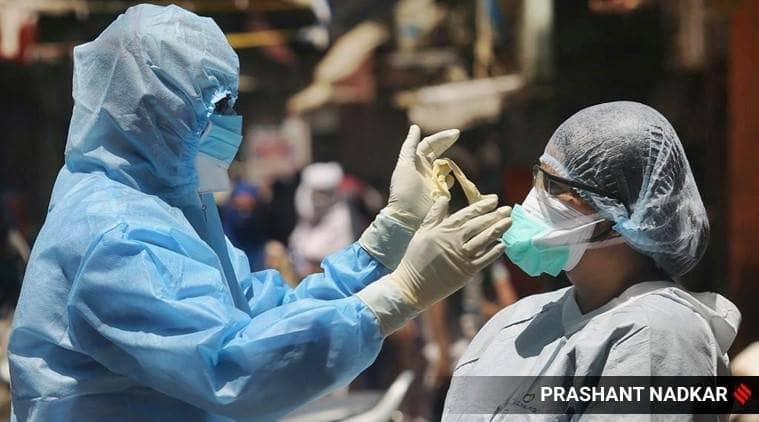 
The SMC health officials have so far covered around 50 lakh of people in the ARI survey. (Representational Photo)

The Surat Municipal Corporation (SMC) is on its 12th round of door-to-door health survey, which is likely to cover the entire 65 lakh population of the city, for early diagnosis of Covid-19 and timely treatment.

The city, which is among the two hotspots in the state apart from Ahmedabad, identified over 140 people with symptoms of Acute Respiratory Infection (ARI), in the last round of survey, which is a huge dip from the first round which began during the first phase of lockdown.

Among the three cities that account for nearly 88 per cent of Gujarat’s total Covid-19 cases, Surat has the highest recovery rate at 69.3 per cent, followed by Vadodara at 57 per cent and Ahmedabad at 44 per cent.

The first round of the door-to-door survey was on March 28 soon after the lockdown was announced. In the first round, over 12.62 lakh houses were covered and 56.86 lakh people were checked, where health officials had found 6,736 cases of fever, cough, cold and breathlessness, with 751 of them above 60 years, while 1,219 of them were below 5 years of age.

A team of 1,700 workers, divided into teams of 2-3 staff each, of primary health workers, municipal school teachers, and clerical staff from other departments of SMC were involved in the survey.

Health Department Insecticide officer JP Vaghasia, who holds charge of the survey, said, “At present, our 12th round of survey is in progress and we are hopeful that it would end in the next couple of days. Many patients were cured due to early diagnosis. Our teams cover around 14 lakh people daily. In our last round, we covered 11.65 lakh houses with 43.25 lakh people. Among them, 144 had fever, cold, cough, and breathlessness. The reason behind the decrease in number of people with symptoms is that many migrant labourers have gone back. Through the survey, a good number of Acute Respiratory Infection cases were identified early.”

He added, “The data we get from hospital is verified with the data obtained through the survey and it was found that many people concealed information regarding their illness. Our teams convince people that if early diagnosis is done, treatment would be successful.”

Surat Municipal Commissioner Banchhanidhi Pani said, “People are afraid of getting quarantined or admitted to the hospital but we are trying to create awareness. The door-to-door survey has helped to improve the recovery rates which is now around 70 per cent. The survey also helps i identifying co-morbidities and get them timely help.”

Deputy Commissioner (health) Dr Ashish Naik said, “We conduct Covid-19 test on symptomatic patients and get the positive cases admitted to hospital… The concentration of active cases in the containment zone is between 70-75 per cent and recovery rate is more than 60 per cent. Among the containment zones, a large numbers of cases – 509 — are from Limbayat area followed by 201 cases from Katargam, 190 cases from Central Zone (wall city area) and 182 from Varachha zone.”

According to Vaghasia the question patterns in containment and non-containment areas are same.

“These include whether anybody in the house has cough, cold, fever, breathlessness and co-morbid conditions or not. Generally in non- containment areas, we do survey on weekly basis while in containment areas we do it on daily basis,” Vaghasia said.