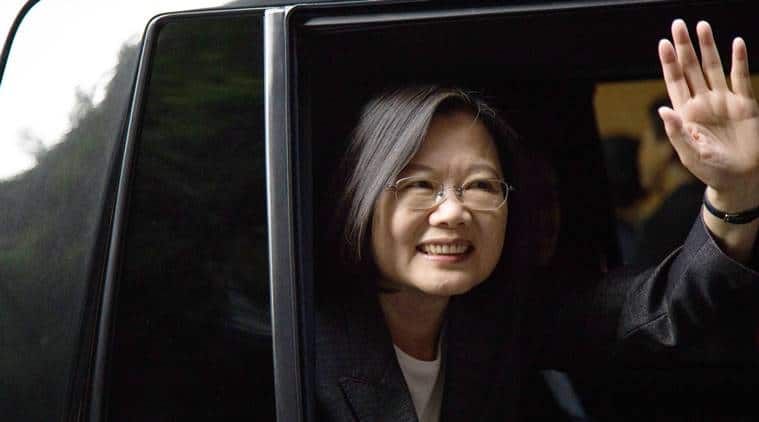 
Tsai Ing-wen, Taiwan’s president, waves while sitting in a vehicle as she leaves a polling station during a presidential and legislative election in Taipei, Taiwan, on Saturday, Jan. 11, 2020. Photographer: Betsy Joles/Bloomberg

Taiwanese President Tsai Ing-wen urged China’s Xi Jinping to “find a way to co-exist” with the island’s democratic government, as she started her second term riding high with a record approval rating and a surge in U.S. support.

In a speech after a pared-down inauguration ceremony Wednesday in Taipei, Tsai, 63, issued one of her most forceful calls yet for an equal dialogue with Beijing. Xi’s government cut off direct communications across the Taiwan Strait during Tsai’s first four years in office, citing her refusal to accept that both sides belong to “one China.”

“Cross-strait relations have reached a historical turning point. Both sides have a duty to find a way to co-exist over the long term and prevent the intensification of antagonism and differences,” Tsai said. “I also hope that the leader on the other side of the strait will take on the same responsibility, and work with us to jointly stabilize the long-term development of cross-strait relations.”

Tsai called for “peace, parity, democracy and dialogue” in relations between the two sides and reiterated her opposition to unification with China under “one country, two systems” like the framework used in Hong Kong. She also pledged to build core industries including 5G and other information and communication technologies, bio-technology, medicine, defense and renewable energy.

“Taiwan’s relationship with the U.S. will continue to warm up as the U.S-China relationship continues to break down,” Stephen Tan, president of the Taipei-based Cross-Strait Policy Association, said before Tsai’s speech. “As long as the U.S.-China relationship remains tense, cross-strait ties won’t improve. All Taiwan can do, and Tsai is expected to do, is to avoid being provocative and changing the status quo, but also not giving in.”

The event marks another historic high point for Tsai’s Democratic Progressive Party, which has grown over the past four decades from a loose band of pro-independence dissidents to become Taiwan’s dominant political bloc. A landslide election victory in January reaffirmed the DPP’s control of the executive and legislative branches and left the Kuomintang — who ruled Taiwan for much of the time since the Chinese civil war ended in 1949 — stuck in the opposition.

Tsai begins her second term with an approval rating of 61%, the highest since she took office in May 2016, according to a survey by broadcaster TVBS released Monday.

The DPP’s rise has upended efforts to by Xi, the Chinese president, to use his country’s economic might to draw Taiwan toward a unification deal. Tsai views Taiwan as a sovereign nation and has rejected Beijing’s “one-China” bottom line.

“Beijing has given up on hoping for demonstrations of ‘sincerity’ from Tsai — partly because they set the bar too high and partly because they don’t believe she is sincere anyway,” said Jonathan Sullivan, director of China programs at the University of Nottingham. “None of the moderation that Tsai has shown has been good enough to negate the preordained opinion in Beijing that she is an independence wolf in status-quo sheep’s clothing.”

In her first term, Tsai repeatedly benefited from Donald Trump’s feuding with China, holding an unprecedented phone call with the U.S. president in December 2016 and securing Taiwan’s first American fighter jet deal in three decades. Tsai’s support for pro-democracy protests in the former British colony of Hong Kong last year helped her consolidate her China-skeptic base and secure re-election.

The Trump administration threw its weigh behind an international campaign to grant Taiwan access to the World Health Assembly earlier this week. And while the attempt ultimately failed, it highlighted the lengths to which the U.S. was willing to go to back a greater international role for Taiwan.

Since Tsai came into office in 2016, Beijing has persuaded seven former Taiwanese allies to switch ties to the People’s Republic of China. Taiwan is now officially recognized by just 15 countries, mostly small states in Latin America and the Pacific. Tsai has also made little progress in securing a bilateral trade deal with the U.S.

U.S. Secretary of State Michael Pompeo congratulated Tsai in a statement Tuesday, saying America “has long considered Taiwan a force for good in the world and a reliable partner.” The two sides “have a shared vision for the region — one that includes rule of law, transparency, prosperity and security for all,” he said.

The stakes for Tsai could rise in her second term, as disputes between Washington and Beijing prompt predictions that the two sides are headed toward a new cold war. While Tsai had so far avoided any moves that might prompt an aggressive response by Beijing, she may face greater demands from the DPP’s pro-independence wing after its recent electoral success.

One figure to watch is Tsai’s incoming vice president, Lai Ching-te. Lai, a former premier who has described himself as an “independence worker,” is a much more outspoken advocate for a formal break from China than either Tsai or his predecessor, Vice President Chen Chien-jen.

“Beijing will continue to employ a mix of its carrots and sticks approach with Taiwan, but with an emphasis on the latter,” said Russell Hsiao, executive director of the Washington-based Global Taiwan Institute. “Indeed, most indicators point to China ratcheting up its multifaceted pressure campaign against Taiwan.”

Although Taiwan has avoided a coronavirus outbreak like those in China or South Korea, Tsai faces many of the same economic concerns as Taiwan’s neighbors. Growth in the first quarter cooled to the slowest pace since 2016, with an increasing number of economists forecasting the economy’s first contraction since 2009.

And Taiwan’s companies could also suffer collateral damage from Trump’s efforts to push back against Chinese influence, such as new U.S. rules barring any chipmaker using American equipment from supplying Huawei Technologies Co. Taiwan’s biggest company, Taiwan Semiconductor Manufacturing Co., gets an estimated 14% of its revenue from Huawei.

“In the next four years, Taiwan faces a variety of threats from China and some from the United States,” said Ashley Feng, a research associate with the Center for a New American Security. “Opportunities for China and Taiwan to cooperate over the next four years are limited and shrinking.”

Europe has finally turned a corner on its Covid-19 vaccinations