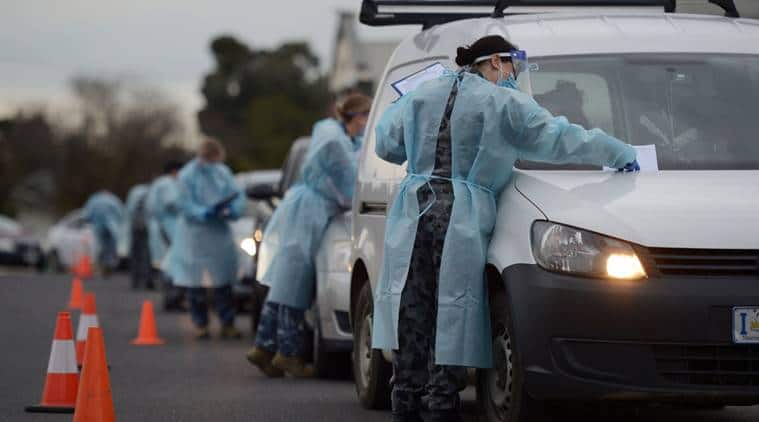 All it took was missteps in the handling of travelers returning from overseas and complacency in a handful of neighborhoods to plunge Australia’s second-largest city into lockdown for the second time in four months.

Even as life in most of the nation returns to normal with offices, schools and bars all open, from midnight Wednesday the 5 million residents of Melbourne will be back under stay-at-home orders that were first imposed in March. The capital of Victoria state is responsible for the vast majority of Australia’s new Covid-19 cases in the past month, plagued by a level of community transmission previously unseen in the country.

The six-week lockdown will cause “enormous amounts of damage” to the economy and people’s welfare, state Premier Daniel Andrews conceded as he announced Tuesday that residents will be forced to stay at home except for essential work, study, medical care or shopping.

The measures have included barring about 3,000 residents of public-housing tower blocks from leaving their apartments even for food — reminiscent of the stringent controls imposed in Wuhan, the Chinese city where the virus first emerged, and making Australia one of the only western democracies to mandate that people cannot step outside their homes.

The drastic move highlights how approaches to mitigating the virus have diverged, with some US cities allowing businesses and social activities to resume even as they record daily infection numbers many times Melbourne’s tally. Melbourne provides a cautionary tale for other big, service economy-driven cities like London that are behind Australia and in the pandemic cycle.

It also shows the fragility of early success in battling the virus. Two months ago, Australia’s buoyant Prime Minister Scott Morrison outlined a three-stage plan to lift most restrictions nationwide by the end of July — a goal now in tatters.

The unraveling of what had largely been a success story in Victoria — the country’s second-most populous state and an engine of the nation’s economy — can be attributed to rushed policy decisions, botched execution and instances of public complacency.

Like other states and territories, Victoria had ordered all citizens and permanent residents returning from overseas to undertake 14 days of quarantine at hotels leased by the government. But instead of drafting in police to oversee the operation, as was done elsewhere in the country, the state farmed the task out to security firms without even inviting tenders for the contract, according to local media reports.

A litany of malpractice followed, the Herald Sun newspaper reported, including improper use of personal protection equipment, allowing families to mix in each other’s rooms, and even some guards having sex with quarantined guests.

According to the report, the virus spread among the guards who car-pooled or shared cigarette lighters. They then unwittingly introduced the disease to their own communities in Melbourne’s poorer and more multicultural suburbs where it spread through large family gatherings that breached social-distancing rules.

“Opening up obviously is a natural thing where you have successful control,” said Linfa Wang, director of the program in emerging infectious diseases at the Duke-NUS Medical School in Singapore. “But whether the society and every citizen is ready and educated enough to cope with the ‘new norm’ of Covid-19” is another matter, he said.

Stung into action, Andrews announced a judicial review into the alleged hotel quarantine breaches. And after the city experienced about two weeks of double-digit daily increases in infections, he ordered the lockdown of 12 suburbs in Melbourne’s northern and western fringes.

But it wasn’t enough. On Monday, Victoria’s neighboring state New South Wales announced it would be closing their shared border for the first time since the 1919 Spanish Flu pandemic. Residents of Victoria have also been barred from other parts of the country where community transmission has largely been halted.

By Tuesday, as the daily tally reached a new state record of 191, Andrews extended the lockdown across the entire metropolitan area.

Australia has been one of the standout performers globally in limiting the spread of the virus. It achieved that by closing international and state borders, quarantining returning residents, social distancing measures and a widespread testing and tracing regime.

As of Tuesday, the nation had recorded just 8,755 cases and 106 deaths, the latter putting it on par with Maine, one of the least-affected US states.

In Queensland state, which had two active cases as of Tuesday, people have been able to enjoy a beer in a pub and watch live sport with some restrictions on numbers, while the Northern Territory, where there is just one active case, removed almost all restrictions last month but still encourages social distancing.

Meanwhile, in Melbourne on Wednesday residents were rushing to supermarkets to stock up. Citizens living in towns near the border with New South Wales who needed to cross to the other side for work waited in long queues for police to check their hastily printed permits.

Australian Treasurer Josh Frydenberg wrote in an op-ed published Wednesday that the outbreak in Victoria, which contributes about a quarter of national gross domestic product, had already eroded the nation’s economic recovery. The lockdown could cost A$1 billion ($695 million) a week, he said.

“It shows us how quickly the pandemic can change,” Australia’s Deputy Chief Medical Officer Michael Kidd said this week. “The situation in Melbourne has come as a jolt — not just of the people of Melbourne but people right across Australia who may have thought that this was all behind us. It is not.”

How To Brew Perfect Cup Of Green Tea For Strong Immunity: Tips And Tricks

Russia’s race for virus vaccine raises concerns in the West

Opinion: What role will the EU play in foreign affairs?