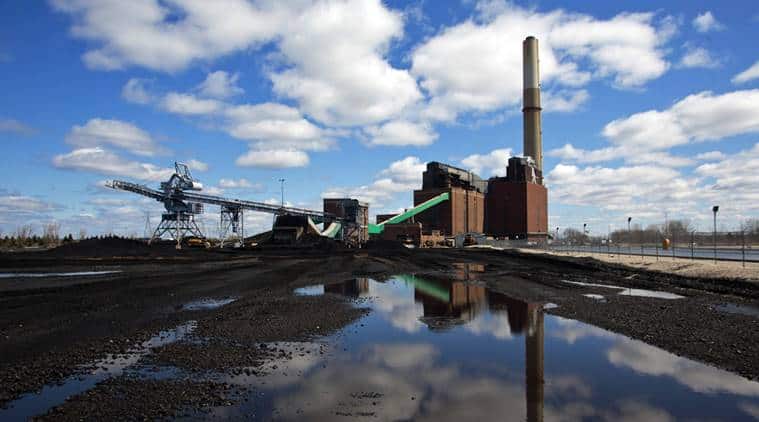 
While the coronavirus pandemic is accelerating the death of coal in developed nations, the dirtiest fossil fuel is alive and kicking in Asia. (AP/File)

While the coronavirus pandemic is accelerating the death of coal in developed nations, the dirtiest fossil fuel is alive and kicking in Asia.

Demand for electricity plunged — and with it the need for coal — as factories around the world sat dormant and people spent months at home. In the U.S. and Europe, that’s expected to accelerate the shift away from the fuel. But in Asia, which makes up three-fourths of global consumption, the appetite for coal is roaring back and expected to continue growing after briefly being tripped up by the virus.

Coal is caught between conflicting geographies — one where its demise is celebrated in favor of cleaner options, and another where the cheap fuel powers rapidly developing economies. At stake is a $200 billion industry at the crux of the global fight to rein in carbon emissions that are driving climate change.

“The future of coal depends on Asian demand, which is still growing, and is offsetting the decline from the rest of the world over the next decade,” said Shirley Zhang, an analyst at Wood Mackenzie Ltd.

The U.S. coal industry has been hit hardest. As power demand slumped, American utilities shut coal plants first, crimping domestic consumption of the fuel. While exports have propped up miners’ earnings in past years, falling global prices have made international shipments less profitable, for both thermal coal for power plants and the metallurgical variety used to make steel.

The U.S. is expected to burn about 454 million tons of coal this year, the U.S. Energy Information Administration said in May, lowering the forecast 15% from its January outlook. The agency has revised down its target for exports by 24% to 63 million tons.

“Coal has really taken it on the chin,” said Benjamin Nelson, an analyst with Moody’s Investors Service. He’s not expecting a rebound next year, and instead expects to see a slow recovery that prompts utilities to shift further away from the fuel. “The longer the economic malaise, the more likely it is that coal plants will get shut down.”

The story is similar in Europe, where the green transition is more advanced and coal prices in May slumped to the lowest level since 2016, when the industry was beset by a wave of bankruptcies. The U.K. hasn’t burned coal for power since April 9, the longest coal-free period since the country opened the world’s first coal-fired public power station in 1882.

The economics elsewhere in Europe don’t stack up either. Planned coal expansions have been scrapped in Poland and the Czech Republic, while Austria and Sweden have closed their last plants during the pandemic. Even in Germany, where the fuel remains entrenched, coal supplied about 20% of the power mix in the first five months of the year, compared to 31% in 2019.

Utilities in the U.S. and Europe may accelerate some plant retirements because of lower demand from Covid-19, according to Carlos Fernandez Alvarez, senior energy analyst at the Paris-based International Energy Agency. “But overall, in the medium term, I don’t see a big impact. When demand recovers, a great part of this will come back,” he said by phone.

Asia, however, is another story. The continent remains coal’s stronghold and is slated to buoy global demand for the next decade as consumption drops elsewhere. Asia’s share in total global coal demand will expand from about 77% now to around 81% by 2030, according to IHS Markit.

For China, which burns and mines about half the world’s coal, the fuel is key to economic health. Coal mining and washing employs about 3.5 million people and provides abundant fuel for the world’s top energy consumer and second-biggest economy.

China may add as much as 130 gigawatts of coal-fired generating capacity over the next five years to reach a peak of about 1,200 gigawatts and will dominate the nation’s generation mix, Woodmac analyst Frank Yu said in a May 22 report.

Economic growth and stimulus is the government’s current priority, and with coal accounting for about 65% of the generation mix, it’s critical to keeping China’s electricity prices low, Yu said. The pandemic may even slow the country’s efforts to move away from the fuel, according to Kevin Tu, a non-resident fellow at Columbia University’s Center on Global Energy Policy.

“Against the backdrop of rising anxieties over economic growth and energy security among Chinese decision makers, upgrading China’s climate ambitions will be politically challenging,” Tu wrote in a June 4 report. “Diminishing coal’s role in China’s energy mix will be more difficult, with potential long-term detrimental impacts on global carbon emissions and prospects for China’s renewable development.”

In India, the government of Prime Minister Narendra Modi last month reinforced its commitment to coal as part of broader Covid-19 stimulus measures, including more than $6 billion on coal transport infrastructure and offering 50 mining blocks for auction. Meanwhile, the annual output target for state-owned Coal India Ltd., the world’s biggest miner of the fuel, was boosted 18% to 710 million tons, an ambitious target fueled by government expectations that power demand will rebound. And its 1 billion-ton target by 2024 remains intact.

Southeast Asian nations including Indonesia, Vietnam and the Philippines are also poised to boost global coal demand over the medium term, according to IEA’s Fernandez Alvarez.

While Covid-19 means that Asian demand for coal is likely to fall year-over-year in 2020, that won’t become a new trend, according to IHS Markit analyst James Stevenson.

“We had been expecting Asian growth in the long term, and we still expect that,” Stevenson said by phone. “It will just be building off a lower base for 2020 because of Covid-19. We will return to growth”

Election conspiracies live on with audit by Arizona GOP